Tenders sought for half a million HSE branded condoms

Contract will be worth about €50,000 with condoms to be given free to protect sexual health 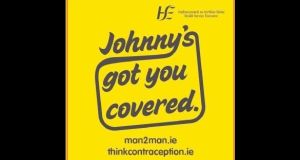 Image of what the packaging on the condoms provided to the HSE should look like.

Tenders are being sought from firms to provide 500,000 HSE branded condoms and 250,000 branded lubrication packets as part of ongoing efforts by the executive to prevent unplanned pregnancies and sexually transmitted diseases.

The tender is estimated to be worth €50,000 and the condoms will be given out free across the country.

The 2016 total for new HIV cases was the highest number since records began and provisional figures for last year showed only a slight dip in spite of the public information campaigns around the dangers of contracting the disease.

Underlining the task faced by the HSE in halting the spread of sexually transmitted infection amongst young people, the HSE Health Protection Surveillance Centre last year recorded an 11 per cent increase in cases of infection in the 15 to 24 year old age bracket increasing from 4,677 to 5,200 with chlamydia making up 50 per cent of cases.

A spokeswoman for the HSE said on Friday: “The National Condom Distribution Service (NCDS) was established by HSE in 2015 to assist in meeting the strategic aims of the National Sexual Health Strategy 2015-2020 to improve sexual health and wellbeing and to reduce negative sexual health outcomes such as STIs and crisis pregnancies.”

She added that the NCDS is to be a central point for distributing free condoms and lubricant sachets to services working directly with population groups who may be at increased risk of negative sexual health outcomes.

“The NCDS supports sexual health campaigns and services targeting young people and MSM (men who have sex with men) communities. Condoms and lubricant sachets are provided through a variety of channels, such as sexual health education programmes, HSE clinical/non-clinical services, outreach work and events.”

The condoms are to be delivered by July.