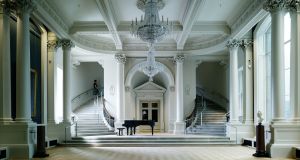 What can be done: the refurbished Shaw Room in National Gallery of Ireland

For the first time in the history of such plans, the National Development Plan is not entirely a case of matter over mind. It is, of course, dominated by big engineering projects but it does find room for some significant commitments to the development of Ireland’s woefully neglected cultural infrastructure.

None of them are knockout, left-field ideas of the kind that might be expected in a document that sets out the aim to foster a “creative, innovative and culturally attuned society”.

The scale of the proposed investment is, in the overall scheme of things, modest. The aggregate level of proposed capital spending on Ireland’s cultural infrastructure over 10 years is estimated at €725 million. To put this in perspective, major capital projects have previously set aside one per cent for an artistic component. And €725 million is 0.625 per cent of the €116 billion plan - though admittedly it is to be spent over a shorter time period.

But if the State really does deliver €72.5 million a year for cultural institutions, it will nonetheless go a very long towards making Ireland’s main national cultural establishments fit for purpose as expressions of a State that finally takes some pride in its own heritage.

Citizens have already seen what decent investment in the National Gallery can achieve: a beautiful and vibrant public space. The hope will be that the same can now be done for the other national institutions that have suffered from decades of neglect: the Crawford Gallery in Cork, the Irish Museum of Modern Art, the National Museum, the National Concert Hall, the Natural History Museum, the Abbey Theatre, the Chester Beatty Library and the National Archives.

The plan gives concrete budgets and completion dates for just three of these: the Crawford, the National Library and the “dead zoo”, all due to be completed by 2021.

1 Coronavirus: No new Covid-19 deaths reported in State for first time since March
2 Tributes paid to Ireland’s deputy ambassador to China who died on Sunday
3 Coronavirus: What will reopen in Ireland’s phases to ease restrictions and what are the dates?
4 Unconvincing account may take some heat out of Dominic Cummings controversy
5 Archaeologists are ‘quite sure’ they have found Red Hugh O’Donnell’s burial place
Real news has value SUBSCRIBE