Significant growth for small towns and villages envisaged in NDP 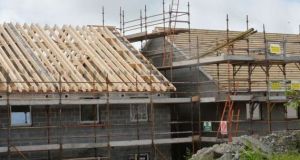 In all, 37 per cent of the country’s population live in towns of less than 1,500 or in the open countryside. File photograph: Alan Betson/The Irish Times

Ireland’s new long-term planning blueprint envisages significant growth for Ireland’s smaller town and villages over the next 20 years, allied to a realistic and sustainable approach to once-off homes in the countryside.

In all, 37 per cent of the country’s population live in towns of less than 1,500 or in the open countryside.

The National Planning Framework recommends that the philosophy of “compact growth” should apply to smaller towns and villages as well as larger towns and cities.

To that end, it has set out that 30 per cent of new housing in those setting will be situated within the existing footprint of the village or town.

Recognising the decline that has taken place in the smaller urban centres in rural Ireland, it states that “building vacancy in rural towns and villages has become increasingly prevalent.”

One of its key objectives is the transformation of derelict sites and buildings in those places, while ensuring a high-density, or suburban, approach to rural housing .

Families often do want to settle in towns and villages but struggle to find a suitable site. New stronger powers will be introduced to support local authorities to acquire land that will help people find sites.

Those stronger powers will include “enhanced” Compulsory Purchase Order legislation to allow the re-use of vacant sites and properties. Louth County Council has used this mechanism to acquire some 30 vacant properties in the past two years.

It also envisaged that a new programme will be established to build new homes in small towns and villages. That would include participation by local authorities, public infrastructure agencies such as Irish Water and local communities “to provide serviced sites with appropriate infrastructure to a range of people to build their own homes and live in small towns and villages”.