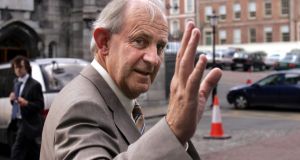 Politicians, business leaders and sporting figures were among the hundreds of people who turned out in Cork on Tuesday evening to pay their respects to property developer Owen O’Callaghan (76), who died in hospital on Monday after a short illness.

Mourners began gathering at Jerh O’Connor Funeral Home at Temple Hill on Cork’s southside from 4.30pm to sympathise with Mr O’Callaghan’s widow, Shelagh, his son Brian and his daughter Zelda, and his grandchildren Isobel, Robbie and Harry.

Also in attendance was the Mayor of Cork County, Cllr Seamus McGrath, while several former lords mayor of Cork city, including Paud Black, Michael Ahern, Donal Counihan and Damian Wallace were also there.

Mr O’Callaghan was a strong supporter of the Cork Business Association, and its chief executive Lawrence Owens and president Pat O’Connell also came to sympathise with the O’Callaghan family, as did Cork Chamber president Barrie O’Connell and Millstreet entrepreneur Noel C Duggan.

Mr O’Callaghan had many dealings with Cork City Council, and former Cork City managers TP Rice and Joe Gavin were present, as well as many current city council officials.

Former Irish rugby internationals Donal Lenihan and Jerry Holland and former All-Black and Munster wing Doug Howlett were also among those to pay their respects. Nearby, Cork Constitution Rugby Club, where Mr O’Callaghan was a member, flew its flag at half mast as a mark of respect.

Mr O’Callaghan, who was predeceased by his daughter Hazel in 2002 in a showjumping incident, will be buried on Wednesday at St Mary & St John Churchyard Cemetery in Ballincollig where he grew up, following requiem Mass at 1pm at St Patrick’s Church in Rochestown, where he lived.