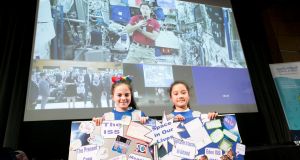 Hundreds of primary school children were left in awe as they took part in Ireland’s “first live video-call with a European astronaut on board the International Space Station (ISS)”.

Three hundred pupils from Limerick, Tipperary, and Kildare, joined other young people from Romania and Portugal in a three-way country video-link with French astronaut Thomas Pesquet.

The close encounter took place at the Millennium Theatre at Limerick Institute of Technology.

Mr Pesquet is on a six-month mission to the ISS, and serving as a flight engineer for Expeditions 50 and 51, and is due to return to Earth next May.

Gearóid O’Donoghue, fifth-class teacher at Scoil Ide, Corbally, Limerick, was left star struck after asking the French spaceman a question about navigation in the cosmos.

“I was very nervous to be honest, and I didn’t think I would be,” he said.

“It was great for the kids to be here as well, they all had a great time planning and making posters and researching the entire project,” he added.

Fifth-class pupil, Sophie Duggan, (10), from Corbally described it as “a great experience”.

Fellow pupil, Seán Kinehan, (11), said: “I just thought it was crazy seeing him floating about and I feel so lucky to have been here sitting on my seat.”

Loretta O’Connor, science co-ordinator at Mary Queen of Ireland Girls National School, Caherdavin, joked all her class were worried whether their test was on this on Friday.

Rebecca McKevitt, (11), from Limerick said it was “exciting”.

Amy Walsh, (11), Limerick, said her space trip was “absolutely fabulous”. She remained undecided however, about ever travelling to space for real. “I don’t know if I would actually take the risk to go to space; I think it’s dangerous. The big risk of going up there is something could go wrong, something could explode,” she added.

Fellow classmate, Angela Kinsella, (11), was more confident “I’d love to be the first Irish woman to go to space. It would be so amazing.” And, once there, what would her first important task be? “Well...my first thing would be to just float all the time,” she joked.

“In 2008, a similar event took place involving a group of Irish people who contacted a US astronaut at the ISS, but the technology wasn’t as good then and they had to speak on the phone,” said an ISS spokesman.