In wake of Brexit, Theresa May has shown little desire to appease Scottish concerns 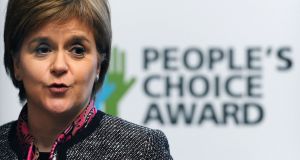 Scotland’s first minister Nicola Sturgeon: need for new referendum becoming “ever clearer” in the wake of the ruling the UK government does not have to consult the devolved Scottish parliament before triggering article 50. Photograph: Nick Ansell/PA

On June 24th, just hours after the confirmation of the Brexit result, Nicola Sturgeon addressed the press at Bute House in Edinburgh. Flanked by the starry European Union standard and the blue-and-white Saltire, the Scottish first minister said that a second referendum on independence was “highly likely” after a large majority of Scots voted to remain in the EU.

On Tuesday, Sturgeon returned once more to the theme of a second independence vote. The need for another referendum was, the Scottish National Party (SNP) leader said, becoming “ever clearer” in the wake of the supreme court ruling that the UK government does not have to consult the devolved Scottish parliament before triggering article 50.

Another referendum is not a given – earlier this month, Sturgeon ruled out holding one this year – but the clamour for a second vote is likely to grow.

Scottish nationalists have promised to put forward 50 amendments to the Brexit Bill in the Commons but few, if any, of these proposals are likely to pass.

Brexit has changed the political dynamic, on both sides of the Anglo-Scottish border. Back in July, then newly minted prime minister Theresa May said she was “willing to listen to options” on Scotland’s relationship with the EU.

In the months since, however, the Conservative leader has shown little desire to appease Scottish concerns. May’s “red, white and blue” Brexit envisages all of the UK leaving the EU on the same terms – anathema to many in Edinburgh, and in Belfast, too.

Westminster feels confident that Sturgeon will not call another referendum – or, if she does, that the nationalists will lose. Opinion polls show support for independence has barely shifted since 2014 when 55 per cent of Scots voted to stay in the UK.

The nationalist’s shared sovereignty vision of “independence in Europe” is not universally popular. Between a third and a quarter of SNP supporters voted Leave in June. While some Scottish Europhiles who opposed independence in 2014 have switched sides, as many have gone in the opposite direction.

But the prime minister’s confidence could yet prove misplaced. Brexit has made Scottish independence more attractive politically, if not economically. The unionist case is increasingly based on low oil prices, hardly conducive to a sense of shared identity.

For May, publicly thwarting Sturgeon’s ambitions plays well to the English Tory – and Ukip – faithful, but that cuts both ways for the SNP. Images of a Conservative premier refusing to cede any ground to Scotland aids the nationalists, who remain remarkably popular after almost a decade in power in Edinburgh.

Tuesday’s supreme court ruling adds to the sense that Scotland is drifting inexorably towards another vote. Sturgeon is cautious by nature but pressure is likely to build as the reality of Brexit sets in.

Timing will be key. Five years ago this month, then SNP leader Alex Salmond announced that a referendum on independence would be held in autumn 2014. At the time barely a third of Scots supported leaving the UK. The nationalists lost that vote but won the campaign. Next time around they could win both.