Northern Ireland ‘near the top of my priorities’, says Brexit minister David Davis

By a verdict of eight to three the UK supreme court has ruled that the British government needs parliamentary approval to trigger Article 50 and initiate Brexit. Video: Reuters 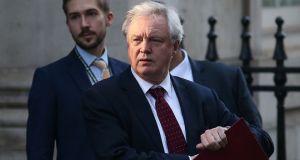 David Davis: wants to “preserve the situation” in the North. Photograph: Daniel Leal-Olivas/AFP/Getty

The British government’s legislation to authorise the triggering of article 50 is set to face numerous amendments from MPs and peers after it is introduced later this week. Brexit secretary David Davis told the House of Commons on Tuesday that although the Bill will be “straightforward”, it will not be drafted in such a way that it can avoid substantive amendments.

Opposition MPs and some Conservatives are pressing for a White Paper before article 50 is triggered, although the government has until now argued that Theresa May’s speech last week outlined its plan for Brexit in sufficient detail. Shadow Brexit secretary Keir Starmer told the Commons on Tuesday that nothing short of a White Paper would ensure that the government could be held to account during the course of the negotiations.

“We cannot have a speech as the only basis for accountability for two years or more. That is the first step. There needs to be a reporting-back procedure and a meaningful vote at the end of the exercise,” he said.

Mr Davis said that MPs had already debated Brexit on numerous occasions and that the Great Repeal Bill, which will transfer EU rules into British law, will offer further opportunities. The government has also conceded that parliament should have a vote on the final Brexit deal before it is signed. But Conservative former chancellor Ken Clarke insisted that parliamentary sovereignty had always meant that governments would pursue broad policy objectives and submit them to debates and votes in parliament before proceeding with those objectives.

“Having one vote right at the end of the process, when the House will be told that it either takes the deal that the government have or goes into the alternative chaos of having no agreements with the EU or anybody else, is not a good substitute for the normal tradition of parliament consenting to the policy aims of the government of the day,” he said.

The UK supreme court ruled that devolved legislatures in Scotland, Wales and Northern Ireland could not veto the triggering of article 50 or the UK’s withdrawal from the EU. But Mr Davis said he would continue to consult with the devolved administrations, adding that he was acutely aware of the special circumstances surrounding Brexit for Northern Ireland.

Although Labour will table amendments to the article 50 legislation, Jeremy Corbyn is expected to impose a whip on his MPs, telling them to support the Bill. A number of Labour MPs have already said they will defy any such instruction, joining Liberal Democrats, the Scottish National Party and the SDLP in voting against the government.

Ukip leader Paul Nuttall said the supreme court decision came as no surprise and would make no difference to the article 50 negotiations.

“The will of the people will be heard, and woe betide those politicians or parties that attempt to block, delay, or in any other way subvert that will,” he said.