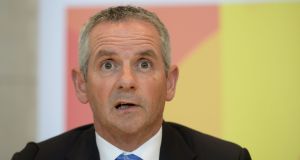 HSE chief executive Paul Reid: Senior managers must ensure with the formation of a new Dáil they have processes and systems to respond. Photograph: Alan Betson

Health service managers will no longer be permitted to leave parliamentary questions or other political representations unanswered for weeks and months, the head of the Health Service Executive, Paul Reid, has instructed.

In a directive to senior management last week Mr Reid said that in future where performance in dealing with such questions and representations from politicians fell below par, he would “require an explanation from the particular area or areas”.

He maintained that long delays and poor levels of information contained in some replies was “unacceptable and damages our reputation both publicly and with the political system”.

Mr Reid told HSE top management in the memo they were required and had an obligation as part of the democratic process to support and assist local and national elected representatives with their work in governance and in representing the public.

He said health service managers did this by responding to parliamentary questions, representations and queries from local and national elected members and by attending, supporting and assisting with the work of Dáil committees.

“In my short time in the organisation, I have seen very good examples from some national divisions, community health organisations and hospital groups performing this role to a very high standard,” he said.

“Unfortunately I have also seen some very poor performances by some areas, particularly in response times and quality of replies to parliamentary questions and representations.”

He said he had also had “a number of complaints” sent to him from elected representatives “regarding long delays in response to times and the quality of the information provided to them”.

“I am sure you will all agree that this is unacceptable and damages our reputation both publicly and with the political system,” he said.

Mr Reid said he wanted senior HSE managers to ensure that with the formation of a new Dáil they had the necessary processes and systems in place to ensure they responded within the required time scales.

He said these were 10 days for replying to parliamentary questions and 15 days for responding to political representations.

He also urged managers to ensure that such replies to politicians from the HSE were “of a high standard”.

“To ensure that we all comply with this requirement, I have asked the parliamentary affairs division [of the HSE] to provide me and each of you with a monthly performance report and, where performance is below par, I will require an explanation from the particular area(s).”

“As a new Dáil is being formed I am determined, with your co-operation and assistance, that we will see a vast improvement in this area of work and that we will no longer have parliamentary questions or representations or other responses to queries left unanswered for weeks and months by any area of the HSE,” Mr Reid said.