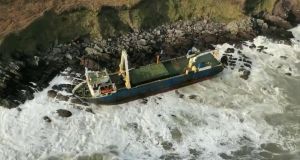 The MV Alta washed up on the Cork coast during Storm Dennis over the weekend. Photograph: Irish Coast Guard/PA Wire

A physical inspection of the MV Alto “ghost ship”, which ran aground near Ballycotton in east Cork on Sunday, is expected to be carried out by contractors for Cork County Council on Tuesday.

Marine surveyors are expected to board the vessel subject to an initial health and safety assessment at low tide.

The move follows an external examination of the wreck of the 77-metre cargo ship on Monday which found no visible pollution within the Ballycotton Bay Special Protection Area or near the proposed natural heritage areas.

However, the environmental group Coastwatch has called for “international help” to deal with the wreck, given the “immense biodiversity value” of large areas which are designated as Natura 2000 sites, “many of international importance for seabirds”.

Karin Dubsky, director of Coastwatch, said volunteers were not comforted by a statement from Cork County Council to the effect that the wreck does not currently pose a risk to the special area of conservation within the Ballymacoda/Ballycotton area.

“Comfort would have been confirmation that expert oil removal support was on its way,” she said.

Two days ago @hmsprotector discovered this apparently abandoned Merchant Vessel whilst mid-Atlantic. We closed the vessel to make contact and offer our assistance, but no one replied! Whilst investigations continue we’re unable to give you more detail on this strange event.🌊🚢🇬🇧 pic.twitter.com/x29sB5IF06

The MV Alta’s journey appears to have begun in the mid-Atlantic in 2018, when the crew of 10 requested assistance, explaining the ship had been disabled since September 19th. It had been en route from Greece to Haiti.

The crew of the Tanzanian-registered cargo ship said they had been unable to make repairs and reported they had just two days of food and 15 days of water left.

The US authorities first sent a HC-130 Hercules airplane from Coast Guard Air Station Elizabeth City, North Carolina, which dropped a week’s supply of food aboard the stricken vessel. The coast guard followed this up by sending the US Coastguard Cutter Confidence, then on patrol near Puerto Rico, some 1,300 nautical miles distant.

The Confidence arrived on October 7th and found the MV Alta about 1,380 nautical miles southeast of Bermuda. At the time of the rescue the maritime publication Captain reported the US Coast Guard’s Fifth District Command Centre was working with the ship’s owner to arrange a commercial tow for the MV Alta.

The next time the MV Alta was sighted was almost a year later when the Royal Navy ice patrol ship HMS Protector announced: “We closed the vessel to make contact and offer our assistance but no one replied. Whilst investigations continue we’re unable to give you more detail on this strange event.” The exact position of the sighting was not released.

According to the writer Mikhail Voytenko, of Maritime Bulletin, the MV Alta may have been towed to Guyana before being hijacked and abandoned a second time.

Mr Voytenko said in July 2019 he had been contacted by people claiming to be the owners of the MV Alta who alleged the ship was towed to Guyana, before being hijacked from there, and later abandoned a second time. The writer and blogger said, “I don’t know what to make of this story.”

The US Coast Guard’s Fifth District was asked for a comment on what, if anything, it knew of the fate of the ship after the rescue of the crew, and a response is anticipated.

The wreck is now the property of the Minister for the Marine under the Salvage and Wreck Act 1993.