Former UUP leader: Unionism must realise it is no longer a majority in Northern Ireland

“Wake up, the old certainties have gone,” says Mike Nesbitt at launch of sectarianism report 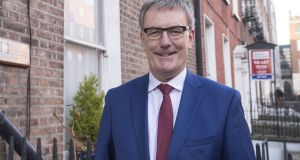 Unionism must wake up and realise that the old certainties are gone and that it is no longer a majority in Northern Ireland, former Ulster Unionist Party leader Mike Nesbitt said at Stormont at the launch of a new report on sectarianism.

And it must become aware of the change in society, he said at the official publication of the report, Sectarianism: The Key Facts. The report was written by independent researcher Dr Robbie McVeigh and commissioned by the Equality Coalition, a collection of non-governmental agencies and trade unions promoting equality in Northern Ireland.

Mr Nesbitt said there was a message for unionism from the current societal changes.

“Wake up, the old certainties have gone. We are not a majority any more,” he said at the launch convened by public service union Unison and human rights organisation, the Committee on the Administration of Justice.

“I encourage unionism to think about that, to think about the implications of where we are and to realise that Northern Ireland in 2020 is not about binaries any more; we are much more complex than that.”

Mr Nesbitt said he was reminded about the tale of the frog being placed in a pan of cold water which very slowly was brought to the boil and how the frog fails to realise the deadly danger he is in.

“I think and fear that sometimes unionism is that frog,” he said. “We need to be aware how things are changing, and we need to stop disregarding the importance of human rights, and we need to think about how we tackle sectarianism.”

One possible way was to have a single education system. He said if you raise children together from the age of three or four “you are giving them a virtual inoculation against sectarianism”.

“Sectarianism remains endemic within northern society and in my view it is at the very crux of all our political, social and community divisions,” he said.

“Sectarianism isn’t some kind of abstract concept; it is omnipresent. In many ways, it is our elephant in the room.”

The 52-page report by Dr McVeigh addresses a range of issues such as changing demographics, shifts in the work force, the growth of the “other” group that does not identify as Protestant or Catholic, sectarian violence and criminal justice, housing, education and the Irish language.

Dr McVeigh, referring to how Northern Ireland “soon” may have a Catholic majority, said that “Catholics may well discover what women have known for many years - namely that being in the majority does not necessarily guarantee any protection from discrimination and inequality”.