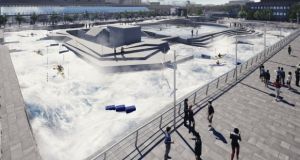 Comments made by Leo Varadkar about a proposed white-water rafting facility at George’s Dock were surprising and concerning, the chief executive of Dublin City Council said in a letter to the Taoiseach.

Owen Keegan wrote to say he was “concerned” by comments Mr Varadkar made about the proposed construction of the €23 million facility, due to begin later this year or in early 2021 according to the council.

In a letter sent days later, released to The Irish Times under the Freedom of Information Act, Mr Keegan said he was “surprised” to hear the Taoiseach’s comments in the Dáil in relation to the proposed facility.

“I am concerned that your comments might be interpreted as indicating that local authorities should avoid exciting and ambitious projects in their efforts to promote economic and community development,” Mr Keegan said.

“I hope, given the positive impact this project will have in terms of urban renewal, tourism, sport, community development in the northeast inner city and especially the safety of emergency service personnel, it will have your support.”

Mr Keegan also wrote to Minister for Housing Eoghan Murphy and Minister for Sport Shane Ross to outline the various functions of the facility.

During Leaders’ Questions that month [December], Mr Varadkar was asked about figures from St Vincent de Paul which showed about 144,000 people are living in homes with leaking roofs, damp walls or floors.

Sinn Féin TD Eoin Ó Broin said the Government should introduce recommendations made by his party in 2017 to ensure that all private rental properties were fully inspected.

Mr Varadkar said money was being provided for inspections from central government.

“But it would be helpful that those parties that control local authorities now that could help to contribute to the cost of that should do so rather than cutting the local property tax or investing in white-water rafting,” he said.

Mr Keegan said in the letter the objectives developed for the project could be categorised into five themes: swift-water rescue training; community and physical regeneration; tourist destination; sport and leisure; education and skills.

“The facility will play a key role in community development in the northeast inner city area, which is still experiencing significant levels of deprivation with certain groups lacking soft skills, such as confidence, leadership, teamwork, self-esteem,” Mr Keegan said.

“The white-water facility has the potential to help address the skills deficit of certain vulnerable groups in the community, help them gain social confidence and integrate better into the workplace and wider society.”

Mr Keegan said the project had been subject to “significant negative media coverage” but that he believed “much of this coverage has been ill informed”.

The facility is due to be used for elite slalom squad training, national and international white-water kayaking events, canoe polo and water polo matches, and for tourist and recreational rafting.

It will also be used by the fire brigade and other emergency services and local authority staff for rescue training to deal with incidents in fast-moving waters, including floods.