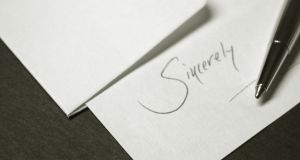 The fraudulent letters stated that if the survivor sent their bank details, Caranua would lodge a sum of money into their bank account.

Survivors of institutional abuse have been targeted by financial fraudsters impersonating Caranua – the State agency responsible for the administration of redress payments to the survivors of abuse.

In at least two incidents last month, letters were sent to survivors which purported to be from the agency. The letters stated that if the survivor sent their bank details to a particular address, Caranua would lodge a sum of money into their bank account.

In the first instance, the survivor was deceased. Their family contacted Caranua, which advised them that it would not request this information and does not deposit lump sums in survivors’ accounts.

Due to the seriousness of the incident, the agency contacted survivor support groups in the UK and Ireland and asked them to make survivors aware not to respond to similar letters if they received them. On January 24th, Caranua was contacted by a relative of a second survivor who had received a similar letter. Again, the person’s family was told that the letter was not genuine.

The incidents were referred to the redress unit in the Department of Education. However, no referral has been made to An Garda, Caranua said, as to do so would be a matter for the individuals concerned.

A spokeswoman for Caranua said it had conducted an internal review of the two individual cases and “could not find any obvious linkages and the individuals concerned were from two different geographic locations within Ireland”.

It is not clear how the senders of the fraudulent letters were able to establish the identities of the survivors or link them to specific physical addresses in order to send the letters to them. In response to queries, Caranua said it was happy that its systems for storing data were secure.

“Caranua operates with a maintained secure ICT firewall, which provides a total security suite that includes intrusion prevention, anti-spyware and gateway anti-virus. In addition, all laptops are encrypted and removable media devices are blocked so information cannot be downloaded by a third party,” a spokeswoman for the agency said.

The spokeswoman said the agency’s understanding is that in the first instance no banking information was sent, but in the second case it was unable to confirm this fact.

Caranua is responsible for a fund of €110 million, which it administers on behalf of the State to support the health, housing and other needs of the survivors of institutions run by religious orders in the State. Some €92.8 million has been spent as of the end of last month. It has made payments on 55,311 survivors of institutional abuse since it was established.

In a statement, a spokesman for the Department of Education said that while Caranua is operationally independent, it has been kept aware of developments in this matter and the actions it has taken.

“The department would urge anyone who has received a letter claiming to come from Caranua and seeking bank details etc to report the matter immediately to Caranua.”