The director general of the HSE Tony O’Brien appears before the Oireachtas Health committee over the CervicalCheck controversy. 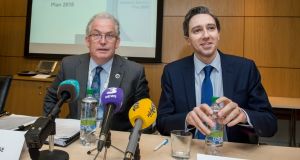 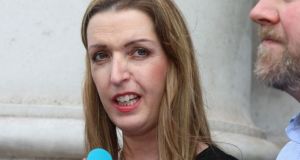 Vicky Phelan: ‘I want to see a Commission of Investigation that is both urgent and prompt but also public.’ Photograph: Collins

HSE director general Tony O’Brien is to take a temporary leave of absence from the board of a US company he joined earlier this year.

The Irish Times revealed on Wednesday that Mr O’Brien became a non-executive director of the San Diego-based contraceptive manufacturer Evofem Biosciences while at the same time continuing to run the health service.

It has emerged on Thursday that Mr O’Brien has agreed to stand aside from the board for the remainder of his tenure as director general. He is due to leave the HSE in July.

It is understood there was contact between Minister for Health Simon Harris and Mr O’Brien this morning and an agreement for him to step down was reached.

Mr O’Brien’s position in Evofem entitles him to annual fee of $65,000 and share-buying options up to $450,000 in his first three years with the company.

There has been renewed calls for him to stand aside from his position due to the ongoing controversy over the CervicalCheck controversy.

It has emerged following a High Court case taken by terminally ill Limerick woman Vicky Phelan (43) that scores of women with cervical cancer were not told that smear test results showing them to be in the clear were in fact inaccurate and the revised test results were kept from them for years.

Ms Phelan who was diagnosed with incurable cervical cancer last year. The diagnosis followed a false negative result from a cervical smear which was tested in 2011.

The Government is to establish a non-statutory inquiry to provide immediate answers to the CervicalCheck controversy before deciding if a commission of investigation is required.

Sinn Féin deputy leader Pearse Doherty said Mr O’Brien’s decision to stand aside from the board did not go far enough. He said the move “only goes to show the inappropriateness of the health minister’s sanctioning the board appointment”.

Tánaiste Simon Coveney said Mr O’Brien “can be of most use to the women of Ireland if he focuses now on the most important” role of establishing the facts in the cervical smear controversy.

Heads absolutely need to roll, in particular Tony O'Brien's, who has shown nothing but arrogance and who is more concerned with defending the indefensible than doing the right thing #CervicalCheckScandal

He said Mr O’Brien would focus on making a positive contribution to the work that needed to be done in relation to the cervical cancer screening controversy.

Mr Coveney said Irish women had been badly let down and that there was a real sense of anger and frustration within Government at what had happened and how.

There had been “ a disgraceful breach of trust between thousands of women and the State”, he added.

Mr Coveney twice did not respond to Mr Doherty when pressed as to whether or not he had confidence in Mr O’Brien. However, he pointed out that the clinical director of CervicalCheck had resigned and the director of the service had stood aside.

“This is about accountability, providing full information, responsibly, comprehensively to a disgraceful breach of trust,” Mr Coveney added.

Mr Doherty said that Mr O’Brien did not have to be in place for him to co-operate with the inquiry set up to investigate.

He added that Ms Phelan had said that “heads absolutely need to roll, especially Tony O’Brien’s” and had criticised his refusal at the Oireachtas health committee meeting to accept full responsibility “for the cock-up”.

“This is so serious. We don’t need an inquiry to know it happened on Tony O’Brien’s watch,” Mr Doherty said. “We cannot allow Tony O’Brien to walk off into the sunset with his pension in six weeks time without accountability”.

Mr Coveney said that no one should doubt that there would be full accountability following an independent process led by international experts.

Separtely, the woman who brought the CervicalCheck controversy to light has called for a public commission of investigation to look into how cancer patients have been treated by the health service.

Vicky Phelan said an urgent and prompt investigation was required and that there has already been too much secrecy around the issue.

“As the woman who exposed this scandal, I want to see a Commission of Investigation that is both urgent and prompt but also PUBLIC. Too much has already happened behind closed doors,” Ms Phelan tweeted on Thursday morning.

She also said Mr O’Brien should step down over the scandal.

Speaking before an Oireachtas committee on Wednesday, Mr O’Brien said he would not stand down. While recognising his organisation had made mistakes, Mr O’Briensaid he didn’t personally “cock up” so he would not take responsibility for it.

It was agreed a person from outside the State would be appointed to conduct a “scoping exercise” to answer the immediate questions including how many women are affected, how many should been informed of a delay in their diagnosis and the level of knowledge within the health service of the extent of the issue.

The individual will be asked to examine if a commission of inquiry is warranted and to decide the possible terms of reference for such an inquiry.

Fianna Fáil health spokesman Stephen Donnelly said politicians should wait for the results of the initial inquiry before making a decision on a more lengthy investigation.

A preliminary inquiry will report back in a number of weeks, he told RTÉ’s Morning Ireland. “Let’s see what they say.”

He also expressed concern that more cases may be uncovered. If there are other cases that have been settled and not disclosed by the HSE and the Department of Health that would mean they had not been “fully candid” with the Oireachtas Committee and “that would be very worrying indeed.”