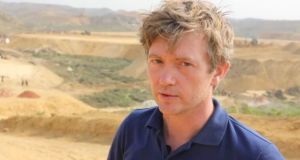 The family of Irish engineer Michael Ryan, who died in the Ethiopian Airlines crash on Sunday, had been planning to go to Rome next week to celebrate his 40th birthday.

Describing him as an amazing person, his mother Christine Ryan said Mr Ryan wanted to save the world.

“He was always a visionary, he always wanted to help others and that was his vision in life and he loved people. He’d light up a room when he came into it and people loved him and he had a way with people.

“He always wanted to help people, that was his thing in life. He wouldn’t be interested in a nine-to-five job, he was one of those that put everything into his work,” she told RTÉ radio’s Morning Ireland.

The father-of-two, a United Nations aid worker, was the sole Irish victim when the the four-month-old Boeing 737, flying from the Ethiopian capital Addis Ababa to Nairobi in Kenya, crashed shortly after take-off. There were no survivors among the 149 passengers and eight crew on Flight 302.

Mrs Ryan had known Michael was going to be on a flight to Nairobi, but she did not know he had been on the Ethiopian Airlines flight that had crashed shortly after take off until Michael’s wife Naoise contacted her.

“I had heard that the flight had gone down, but I didn’t realise he was on it until Naoise contacted me.

“I was hoping that he wasn’t on that flight, that he might have been on a different one.”

“We still can’t believe it, we can’t come to terms with this. His wife Naoise and his children, everybody is just devastated. Nobody can believe that this has happened.”

She went on to describe her son as “a very enthusiastic person, he had a great vision...he believed in engineering, putting people first and he was involved in a lot of different projects worldwide - flood relief and landslides, Ebola and had been in Afghanistan, Pakistan and Sudan and a lot of African countries.

“He just felt he made a difference. He did so much for Rohingyas, all the other projects that he was involved in. He had a marvellous vision, he just got there and did it, and had great enthusiasm.

“It just took him this time. It’s just unreal, we’re finding it very difficult to come to grips with it.

“He did an awful lot with Ebola, landslides, flood relief, and he was always looking forward to doing his best with people and achieving goals with people, he wanted to save the world as far as he was concerned and he had a vision for that.

“He just seemed to put all his energies and do that, and his wife and family really appreciated what he was doing. Great that he could do it, he was great with them when he came back, it was all hands on deck with them, he brought his children off surfing or golfing in Lahinch. He just loved west Clare, Lahinch, the area, he loved life and living.

“He had such enthusiasm for anything he set his mind to, whether it was work or family, he was a continually enthusiastic person.”

Mrs Ryan explained how Michael had been based in Rome. “He worked from there, he liked to go out on the field, he knew his life was at risk, he was in contact helping regarding Ebola, he knew there was a lot of risk involved in the job he was doing.

“He had some amazing stories, there was danger there as well, there was a lot of danger for him, but he loved his work and he loved his job, we all appreciated that he was doing all this work, he was supported by his wife and family at all times.

“You couldn’t take that away from him, that was his life, he did an awful lot with the Rohingya, he sent us photos of his work in various places, the work he had done, he was so enthusiastic about it.

“Next week we were meant to go to Rome to him for his 40th birthday on March 28th, his son was going to be christened in Rome, we were all heading off, we had our flights booked to go next week. He would have been back from Naiorbi.”

Warm tributes have been paid to Mr Ryan by those involved with him in a campaign against Office of Public Works plans to erect flood defences in Cork city.

Mr Ryan, who lived on Popes Quay in Cork city centre with his wife, Naoise, and two young children, was involved in the Save Cork City campaign against the proposed OPW flood relief plan for Cork.

Campaigners argued the erection of concrete walls along the north and south channels of the River Lee would reduce public access to the river and Mr Ryan was involved in the campaign from the outset.

Save Cork City spokesman, John Hegarty spoke this evening of their shock and sadness as the group learned of Mr Ryan’s death in the crash on the flight from Addis Ababa to Nairobi on Sunday morning.

“We are all very shocked, it’s just sinking in and if we were to say anything about Mick, it’s that our sympathies go out to his wife, Naoise and their children, he was a great guy,” said Mr Hegarty.

“He was involved with us in Save Cork City from the outset and advised us on a lot of engineering matters together with retired Prof Philip O’Kane from the Civil Engineering Department at UCC.

“They were very interested in exploring the option of a tidal barrier across Cork Harbour rather than high defence walls along the city quays and they did a lot of work studying that option with us.

“He also lived on Popes Quay so he had a close interest – he would have been one of the people very directly affected by the OPW scheme so that very much informed his interest in the campaign.

Mr Ryan previously worked with UN abroad but when he first became involved with Save Cork City, he was working on a contract basis with the Port of Cork advising them on engineering work in Bantry.

“He was a very likeable guy and because we all worked together on the campaign, it was quite intense so we got to know each other very well very quickly and we had a lot of laughs together.

“We all had common ideas on the scheme so I’ll be looking back at that time when he was with us with a lot of fondness.

“It’s very sad and again our thoughts and sympathies are with his family.”