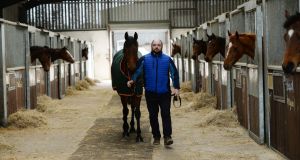 John McConnell at Rock View Stables with Hannon, who is running at Cheltenham. Photograph: Alan Betson / The Irish Times

Camilla Sharples says she is not nervous, just “really excited”. As “travelling head lass” for trainer Gordon Elliott, she was on the first of his horse lorries to leave on Saturday for this week’s Cheltenham Festival.

“It is our biggest number for any Cheltenham,” says Sharples of the 45 horses the trainer is sending to the four-day festival from Elliott’s Co Meath-based yard.

This year’s Cheltenham Festival, which starts on Tuesday, will be the largest gathering of British and Irish sports fans before the UK is due to leave the EU on March 29th.

It marks one of the biggest movements of horses from Ireland to Britain during the racing calendar. Some 341 of the 924 horses in contention at Cheltenham this year, a record number of Irish entries, are trained in Ireland by 42 trainers.

A messy Brexit threatens to disrupt the tripartite agreement that permits the movement of horses between Ireland, Britain and France without veterinary inspections or health checks.

“Everyone is slightly worried but no one really knows what is actually going to happen,” says Sharples.

Elliott, who is favourite to be the festival’s leading trainer for a third year in a row, had eight winners in all last year and has saddled 22 Cheltenham winners.

A highlight for him this year will be leading out a contender, Shattered Love, for the first time in the coveted Cheltenham Gold Cup on Friday, the final day.

Elliott’s staff are also hoping Apple’s Jade, one of the festival’s favourites, owned by Ryanair chief executive Michael O’Leary, can win the Champion Hurdle on Tuesday, a race the Meath man has never won.

But first, Elliott’s 60-strong team have to get his runners to the English Cotswolds.

Door to door, it takes 10-12 hours to transport Elliott’s horses from their home stables to Cheltenham. With no checks required, lorries can arrive at Dublin Port as late as an hour before the ferry sails.

Sharples says the horses arrive at Cheltenham a day or two before race day to let them unwind. Any post-Brexit checks at the port that might delay the transit of horses would not be good for them.

“The horses’s welfare is number one. Ten or 12 hours is long enough. It is not good for the horses to be stood on the lorries for longer than they have to,” she says.

John McConnell, a horse trainer and qualified vet based near Stamullen, Co Meath, runs a smaller yard but is equally concerned.

“There is nothing worse than sitting in traffic and seeing the horse kicking the lorry or sweating and there is nothing you can do about it,” he says.

“We would just have to go earlier because it will take them longer to recover. It is very hard to quantify how it affects them standing for eight or nine hours but it does affect them. It is kind of like a jet lag really.”

He is running a four-year-old hurdler Hannon in the Triumph Hurdle on Friday and is aiming to head for Cheltenham on Wednesday morning to give the horse all of Thursday to recover.

“I don’t think our checks will be anything major. Any extra paperwork can be done quickly or in advance but it will be the delays in the ports that will cause problems,” says McConnell.

The trainer has another horse, Go Another One, running at Aintree, the first major race meeting after the UK’s departure from the EU, which some believe could be the first casualty of Brexit.

He still believes Brexit will not happen between the two festivals.“I still have faith in human intelligence. My faith is definitely being tested by the whole carry-on,” he says of the political chaos around the UK’s exit.