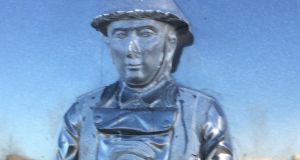 Vandals damaged the face and helmet of a statue of a fallen first World War soldier in Kilkenny and hacked off part of its nose.

Thirty-two candles, representing every county in Ireland, were placed in front of a vandalised first World War monument at a vigil in Kilkenny on Wednesay evening.

More than 40 people attended the gathering in response to the face and helmet of the statue of a fallen soldier being damaged between Sunday night and Monday morning. Kilkenny gardaí are examining a lump hammer and a vice grips recovered near the scene and CCTV footage is being reviewed.

The memorial, which costs some €200,000, is one of two in Kilkenny unveiled last year to remember 822 people from the area who died while fighting in the first World War, the majority of them in the British army.

Donal Croghan, chairman of the Kilkenny Great War Committee, told the vigil that the statue would be repaired again and again if necessary.

“Whoever is doing the damage - you are wasting your time,” he said, adding that the incident did not reflect local feeling about those who fought in the war. “We won’t lose the enthusiasm or the initiative to actually keep it repaired. It took us eight years to get this in place.”

Mr Croghan added: “These were Irishmen, they were Kilkenny men. Let’s not forget that. They wore a British uniform - that was just of the time. Our country in effect did not exist as a republic.”