Hacking ruled out as cause of air traffic control failure 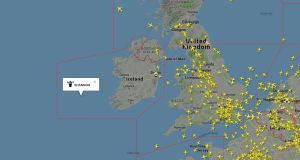 Hacking and cybercrime have been ruled out as possible causes of a failure of the air traffic control system which led to the temporary closure of Irish airspace on Wednesday night.

The issue affected the air traffic control hub in Ballycasey which services Shannon and Cork Airports as well as transatlantic flights. The Irish Aviation Authority (IAA) is currently investigating how the fault came about.

“The technical issue was not a radar problem, and is most likely a simple software issue in a complex system. There is nothing to suggest hacking or cybercrime was involved,” a spokesman said. “Our technical experts are working to isolate the root cause of the issue. These are complex systems, and identifying the cause could take some time.”

The IAA said a fully independent back-up system kicked in as soon as the fault emerged. Flights would continue to operate on this system until the cause of the fault was determined.

It said flights already in the air when the system went down were in no danger, and were transferred immediately onto the back-up system.

A small number of flights were delayed on Tuesday night, but normal service has now resumed. The issue did not affect Dublin airport, which operates an independent system.

The cause of the fault was likely a software issue, said the commercial, technology and training director of the IAA, Philip Hughes. He told RTÉ’s Morning Ireland that it was not a question of the equipment being old as Ireland has one of the most modern air traffic control systems in Europe.

“The equipment is relatively new and well maintained and updated frequently.” He added it “could be a relatively simple problem”.

Mr Hughes apologised to any people who were delayed because of the technical issue. “A handful of flights were affected in Shannon and Cork, they were all dealt with. It was relatively quiet last night. The busiest part is after midnight.”

There were very few overflights [flights to and from other countries that fly over Ireland but are monitored by the IAA when in Irish air space] during the time that the radar was down, most of them are after midnight, said Mr Hughes.

He said at all times the IAA was co-ordinating with other air traffic control centres in neighbouring countries where a network operates in such circumstances. “It is highly rare to have this kind of problem.”

The managing director of Shannon airport, Andrew Murphy, said services were operating as normal on Wednesday, but advised travellers to pay attention to updates on social media.

He said Shannon became aware of the problem at 7.30pm on Tuesday when it was informed by the high-level radar centre that there was an issue with radar cover.

Mr Murphy said four inbound flights were affected, but that after delays of one to two hours all landed safely. Two departures were also affected.