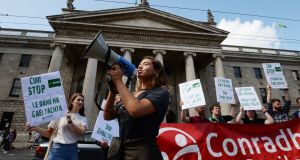 Conradh na Gaeilge protesting outside the GPO in August to ensure An Post will not end services through Irish in Gaeltacht areas as part of the current redundancy process. Photograph: Alan Betson

Almost 90 community, language and Gaeltacht organisations have come together to support a pre-budget call for funding of a plan that would help create almost 1,200 new jobs in some of the most disadvantaged parts of the country.

The fully costed plan, submitted by Conradh na Gaeilge, outlines where Government investment would lead to the creation of 1,190 jobs over three years at a total cost of €18 million.

The groups supporting the plan, many of which have experienced significant funding cuts in the last decade, are seeking an allocation of €9 million in this year’s Budget. The remaining €9 million would be allocated in the following two budgets.

“The plan is very clear regarding where the money will be spent. It is very detailed and results oriented,” said General Secretary of Conradh na Gaeilge Julian de Spáinn.

“We outline the number of jobs each project will deliver. We want to be as comprehensive as possible. Most of the jobs will be created in the Gaeltacht,” he added.

The plan has been agreed by a total of 87 groups including Conradh na Gaeilge, Gael Linn, Glór na nGael and USI. Recommendations contained in the plan have also received the support of Foras na Gaeilge, the public body responsible for the promotion of Irish throughout the island of Ireland, and Udarás na Gaeltachta, the state agency responsible for the economic development of Gaeltacht areas.

Both State and non-governmental organisations working in the Irish language and Gaeltacht sectors have experienced significant funding cuts in recent years and Mr de Spáinn said the organisations supporting the plan were seeking “fairness” when it comes to national spending priorities.

According to Conradh na Gaeilge’s submission, this cut in Údarás funding has “severely curtailed” the agency’s ability to create employment in areas where employment levels have a direct relation to the viability of the Gaeltacht.

Foras na Gaeilge has seen a 15 per cent drop in funding since 2003 while at the same time the Arts Council has received an increase of 54 per cent.

“There is a lot of ground to make up to correct the funding shortfall,” Mr de Spáinn said.

“Údarás na Gaeltachta told us that if they were allocated €5 million next year as part of this plan, they would be in a position to allocate it immediately and could create much needed employment in the Gaeltacht as a result.”