Protestors from the 'Take Back the City' campaign staged a sit-down outside the Department of Taoiseach blocking traffic. 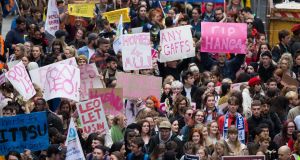 The #RaiseTheRoof protest at the Dáil on Wednesday. Photograph: Tom Honan for The Irish Times

Dublin City Council (DCC) has been considering a plan to house up to 150 homeless people on a rented cruise ship, to help tackle the housing crisis.

The local authority had explored renting a cruise ship from a private operator, to house between 100 and 150 single homeless individuals, before shelving the idea.

Mr Keegan was responding to letters sent by Mr Murphy to the four Dublin local authorities, setting targets to provide additional homeless family hub accommodation and beds for rough sleepers. The correspondence was released to The Irish Times under the Freedom of Information Act.

Up to 10,000 people, including 3,000 students, took part in the #RaiseTheRoof protest on the housing crisis in Dublin on Wednesday. The housing and homelessness crises are now affecting “everyone” and could become “the new water charges” in terms of mobilising protesters, according to speakers at the rally.

Following the rally, about 100 students staged a sit-down protest outside Government Buildings for a short time.

The local authority chief said targets set by Mr Murphy to house 300 extra homeless families in family hubs by the end of the year were “unlikely to be achieved”, according to the correspondence sent by Mr Keegan.

The chances of meeting targets for extra family hubs and rough sleeper beds would be increased if previous council proposals, such as the cruise liner plan, “were revisited”, Mr Keegan said.

Brendan Kenny, head of DCC housing services, said the local authority had previously put the idea to the Department of Housing, “but it never really got legs.”

At the time the city council decided against pursuing the plan, “but it is something we are not ruling out” for the future, Mr Kenny told The Irish Times.

The cruise ship plan was first raised when there were challenges providing housing for single homeless males, Mr Kenny said. Currently the local authority is having difficulty dealing with high levels of family homelessness, for which cruise ship accommodation “would not be suitable”, he said. Estimated costs for the proposal had not yet been examined, he added.

In the Dáil, Taoiseach Leo Varadkar defended the Government’s record on housing but acknowledged there was an emergency. “If it wasn’t an emergency, we wouldn’t be spending €60 million a year to put people up in emergency accommodation, we would not have brought in rent caps in urban areas and we wouldn’t have fast-track planning.”