Installation of CCTV helps, but criminals simply move on to the next area, Oireachtas committee hears 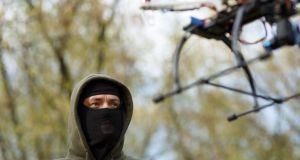 The use of drones by criminals, the committee heard, has added to the fear felt by rural communities, who are often too fearful to confront suspects, or to report suspicions to the gardaí. File image: iStock

Criminals are using drones to spy on on farms and rural properties before targeting them for burglaries, according to one of the country’s biggest community groups.

The gathering of intelligence is happening in “specifically-targeted” actions by well-organised gangs, Mike Sweeney, the president of Muintir na Tíre, told the Oireachtas Committee on Justice.

“Some of these individuals are able to case out farms, quite detailed casings with high technology equipment such as drones,” Mr Sweeney said, adding that the drones have fuelled an increase in thefts.

Meanwhile, the installation of close-circuit television cameras helps, but the criminals simply move on “to the next area, and the next area”, he told the committee.

Last week, garda headquarters issued an instruction to all stations across the State to ensure that film is downloaded from any drones that are seized by officers.

The use of drones by criminals, Mr Sweeney said, has added to the fear felt by rural communities, who are often too fearful to confront suspects, or to report suspicions to the gardaí.

“I spoke to a man recently, where he and his family sat in their kitchen eating their evening meal while individuals walked past their kitchen window in their own private yard with dogs going for a walk down through their farm.

Nevertheless, Muintir na Tire told the Oireachtas committee it was important that crime was not “hyped” because the fear of crime “can be almost as harmful as the actual affects of crime”.

The Oireachtas committee will soon hear from senior Garda officers about community policing plans, along with best-practice advice from the Police Service of Northern Ireland - the first time the PSNI will appear before it.

However, Dr Johnny Connolly, a member of the Commission on the Future of Policing in Ireland, told the committee that community policing is currently poorly resourced, badly-managed and not valued.

Gardaí are being told to introduce mobile phone apps to help the public to contact them, yet most stations do not have email and gardaí do not have officially-supplied smart mobiles.

Young gardaí interested in community policing generally drift out of that work and into specialist units in the Garda because specialist work is more valued, and offers better prospects.

Community policing officers are moved to other units when pressures emerge, even policing sporting events, which damages morale and breaks down local ties.

Dr Connolly, from the University of Limerick’s Centre for Crime, Justice and Victim Studies, School of Law, said garda efforts to recruit “suitable” community policing gardaí are “ill conceived”, while many are not fully-trained.

Gardaí working in the same districts, but in different units should work as a single team, but this can only happen if local teams are given more independence, he said.

“They should develop their own district policing plans, consulting with local community fora,” he told the committee. They should be equipped to deliver all routine policing services,” he said.

Garda headquarters should set national targets, but frontline police units “should decide how they can best deliver those objectives and be accountable to their supervisors for the outcomes.

“There must be a high degree of delegated authority, complemented by stronger local supervision, notably at sergeant and inspector level,” Dr Connolly added.