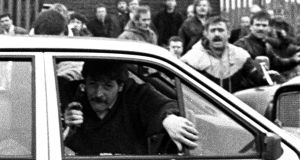 The car containing two British army corporals, Derek Wood and David Howes, as it drove into a funeral cortege in west Belfast in 1988.

Thirty years ago today in Belfast a silver car reversed at speed into the republican funeral cortege of an IRA volunteer, Caoimhín Mac Brádaigh, also known as Kevin Brady. What followed in the next 20 minutes was so harrowing, there were fears it might tip Northern Ireland into civil war.

The car contained two British army corporals, Derek Wood and David Howes. Republicans were convinced it was a loyalist attack – a repeat of a grenade and gun attack by a loyalist in Milltown Cemetery three days earlier that killed Mac Brádaigh.

Wedged in by a mob hell-bent on lynching its occupants, Wood drew his pistol and fired a warning shot – to no avail. When their captors discovered an ID marked “Herford” in the pocket of Howes, they read that as “Hereford”, the SAS base in England.

To them, here was a clear-cut case of collusion: loyalists first, now the SAS. In fact Herford is a town in Germany where Howes had been based until the previous week.

The soldiers were stripped, kicked, beaten, thrown over a wall (one of their legs catching on a steel spike), bungled into a taxi, stabbed in the neck and driven to waste ground. As they staggered out, arms flailing in a desperate attempt to escape, they were shot.

The incident was famously captured in all its horrific detail by a British army helicopter with a live heli-teli feed to a 10-inch screen in a nearby police/army control room.

Fortunately, the North stepped back from the brink. Because the public lynching was so traumatic, it caused both sides to look at themselves closely in the mirror and to begin the long march towards peace and the Belfast Agreement whose 20th anniversary is this Easter.

To this day, however, republicans remain convinced that both Stone’s attack and the corporals driving into Brady’s funeral cortege were the result of collusion at some level by the security forces. The charge is perhaps impossible to disprove but the revelations in BBC 2’s The Funeral Murders makes a valuable contribution to the historical record. It is one of the most insightful and dispassionate documentaries about the conflict in recent times.

Seanna Walsh, who read out the IRA’s final ceasefire declaration in 2006, says the corporals were “undoubtedly undercover. They weren’t in British army uniform, and they didn’t have the standard GI haircut.” True, but that was because they were “techies” who belonged to the Signals Regiment and their job sometimes involved fixing technical problems outside security force bases. Walsh, however, concludes “I don’t believe they were up to any good.”

A police officer, “Noel”, on duty that day disagrees, saying he believes they’d gone “wandering”. That’s consistent with colleagues of Wood who have said he was “showboating” the republican sights of west Belfast to his newly arrived colleague Howes.

Cyril Donnan, the RUC chief superintendent in operational command, says he had no idea soldiers were in the silver car, and when the heli-teli feed showed the mob “surge” towards it, he was confronted with an acute dilemma. Donnan was under strict instructions “not to deploy” security forces in order to allow the funeral to go ahead without interference.

He discloses the security force stand-off was at the request of the Catholic Church to RUC headquarters. Previous IRA funerals had sometimes ended in undignified clashes with a coffin once almost splitting open. When the IRA undertook not to use traditional IRA funeral trappings, like shots over the graves, the RUC agreed to the request.

“We didn’t take any action initially because we had no idea what was going on,” explains Donnan. “As soon as we realised something was wrong, we decided we needed to get out there.” Asked if that meant defying his “stand-off” orders, Donnan admits “We did.”

His first inkling that the two dead men were soldiers was when he arrived at the scene and was told their burned-out car had armour plating in the backrest of the seats. “I’ll not forget the scene until my dying day,” says Donnan. “They were stripped down to their pants, both men, and the steam was actually rising from their bodies, and we weren’t actually sure whether they were dead, but we couldn’t find any pulse.”

George Higgins, a soldier who saw the heli-teli footage a few hours after the lynching says it was like watching “hyenas” who had “got their kill and they were just ripping it apart”. He says it still haunts him so badly that he has counselling.

Many republicans also remain convinced there was collusion between the police and Michael Stone when he killed Caoimhín Mac Brádaigh and two others at the earlier funeral of the three IRA volunteers shot dead by the SAS in Gibraltar.

They base this on their suspicion that behind the RUC’s agreement not to police this funeral was a hidden agenda: colluding with Michael Stone to get him and his grenades and gun into Milltown cemetery. “That’s the day Michael Stone, out of the blue, decides to attack,” former IRA man Danny Morrison tells the BBC. “So in my mind and in the minds of most people in our community, there was collusion.”

What George Higgins says about the way some police officers cheered watching the footage of Stone’s deadly kamikaze assault will probably fortify that suspicion. “Every time one of the grenades blew up it was like ‘yeah, yeah, yeah . . . pity you didn’t get more of them’,” says Higgins. He, however, found their reaction “totally disgusting”.

And then there’s the presence of a white van at the corner of Milltown cemetery where Stone tried to make his escape. For many republicans, this van remains a mystery. “I presumed the van was the British army or the RUC,” says Gerry Adams.

I understand it may indeed have been a police traffic van. But far from helping Stone escape, it drove off when he launched his attack. Police officer “Noel” says, “There was no way a police van was going to get Stone away. Stone was a terrorist and a murderer.”

Indeed, Stone’s fate was left in the hands of republicans who gave chase, braving his bullets and grenades. “A soldier doing that would probably be awarded the Victoria Cross for bravery,” says Higgins.

The IRA seized Stone and drove him away. Police sources have told me that Stone later told them his IRA captors said they were going to burn him alive. However, Donnan reveals that he sent a police snatch squad to intercept the car. One officer – Billy Hamill – says that while gingerly patting Stone down to see if he had any more grenades in his pockets, he found his Magnum pistol. “The f*cking thing’s jammed or I’d have got more of the bastards,’” said Stone.

The programme avoids coming to a conclusion about whether the event that triggered the funeral murders – the SAS shooting of the three IRA volunteers in Gibraltar – was an “execution” or whether their arrest was ever a realistic option. Sean Savage, Daniel McCann and Mairead Farrell were planning to explode a car bomb close to the assembly point for a scheduled British army parade two days later.

The SAS shot them while unarmed as they headed back to the Spanish border after leaving a car the British suspected contained the bomb to be remotely detonated. In fact it wasn’t – although the British government at first said it was.

McCann’s cousin, Sean Murray, who was a senior figure in the IRA’s northern command, concedes the trio were “not innocents. They were there on active service.” But Murray also says they could have been arrested – either coming from Gibraltar or returning to the Spanish mainland. Perhaps. But looking back, that’s not always how things worked in what the IRA has always chosen to call a war.