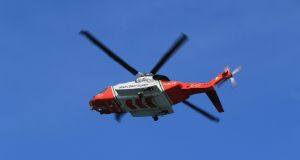 An interim statement on the Rescue 116 helicopter crash has called on the Minister for Transport to conduct a “thorough” review of search and rescue aviation operations in the State to ensure “effective continuous, comprehensive and independent oversight”.

CHC Ireland, which provides air/sea rescue for the Irish Coast Guard, is also called on to review its safety management systems in the interim report, published on Friday morning.

Mechanical fault was ruled out by the Air Accident Investigation Unit (AAIU) on April 1st last year as a cause of the crash.

In an interim statement published on Friday the unit makes three recommendations relating to failures of oversight for search and rescue (SAR) by the State, principally the Irish Aviation Authority; weaknesses in the safety management systems (SMS) by CHC Ireland; and a software issue with data recorded, which is not directly relevant to the cause of the crash.

The AAIU report recommended the Minister for Transport, as the issuing authority for the Irish National Maritime Search and Rescue Framework, should carry out a thorough review of SAR aviation operations in Ireland to ensure there are appropriate processes, resources and personnel in place to provide effective, continuous, comprehensive and independent oversight of all aspects of these operations.

It recommends that CHCI, with external input, should conduct a review of its SMS and ensure its processes and procedural adherence are sufficiently robust to maximize the safety dividend; this review should consider extant risk assessments and a thematic examination of the corpus of all safety information available to the operator, both internally and externally.

It also recommends that the Sikorsky Aircraft Corporation make necessary updates and modifications to the S-92A helicopter to ensure that latitude and longitude information recorded on the flight data recorder reflects the most accurate position information during “all flight regimes and mission profiles”.

It is understood small pieces of information in the data downloaded about the flight were missing, particularly at low speeds, due to a software issue, but the information is not germane to the overall analysis of the flight.

The AAIU is still working on its final report, which may take some months, and a separate Garda and Health and Safety Authority investigation is also continuing.

The two recommendations in its preliminary report issued last April, relating to anomalies in chart information software and a flaw in installation of locator beacons on crew life-jackets, are still being implemented, and are therefore still “open”, the report notes.

The AAIU says it will be focusing in its future report proximate and contributory factors of the accident sequence as in:

- The utilisation profile of SAR helicopters in Ireland in recent years

In a statement, Minister for Transport Shane Ross said he had asked his officials “to make arrangements to ensure that this review is instigated without delay.

“This review will be carried out by an external party and it will take account of the previous and on-going work cited in the AAIU report in relation to the SAR aviation oversight.

“The aim of this review will be to ensure that our arrangements in this regard are sufficiently robust and measure up to international best practice models”.