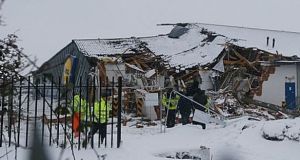 Gardaí at the Lidl store in Fortunestown Lane,Tallaght, after it was looted. Photograph: Stephen Collins/Collins

Lidl is to rebuild its store in Fortunestown Lane which was looted and destroyed during the recent big freeze.

The German owners decided demolition and rebuilding was the best option.

Looters used a digger to smash through the roof of the building on February 28th when the snow was at its worst. They removed a steel safe from the building.

Gardaí required help from the Defence Forces to get to the crime scene because of the poor condition of the roads.

Lidl said that it will rebuild the store to a different design than the one that was destroyed. A spokeswoman said the new store will be on two storeys rather than the one and will be similar to its concept store in Tallaght.

She said the company will be able rebuild using the existing planning permission which it had for the store. The new supermarket will open in late summer.

The spokeswoman said Lidl had been “blown away by the level of support received from our loyal customer base in the Fortunestown area over the past few weeks”.

The supermarket said it intends to retain for the time being its shuttle bus services to its Whitestown Way store in Tallaght.

Meanwhile, permission for another Lidl store at a controversial location in Carrick-on-Shannon, Co Leitrim has been refused by An Bord Pleanála.

The company lodged an appeal against the decision by Leitrim County Council to refuse permission for a site near the Shannon river.

The planning board upheld the decision by the council on the basis that the proposed building was on a flood plain and the company had not demonstrated a “robust and comprehensive proposal” for an alternative use for its existing store in the town.