How to hide on St Patrick’s Day: dress as a leprechaun

An estimated 450,000 people were in Dublin city centre today for the annual St Patrick’s Day parade. 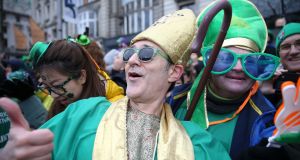 “If we had a kid I’d call him Opus”: St Patrick’s Day, aka Johnny Murphy. Photograph: Brian Lawless/PA Wire

Early on St Patrick’s morning I meet St Patrick. He has his trademark hat, crozier, robe, chewing gum and sunglasses. “My full name is St Patrick’s Day,” he says, “like Daniel Day-Lewis. If we were to get married you’d be Mrs Day. If we had a kid I’d call him Opus.”

St Patrick also goes by the name Johnny Murphy. It’s his 11th “or possibly 12th” year leading the parade. He’s a street performer and mime and can do a good Robert De Niro impression. He loves it, he says. “The high fives are great, a lot less time consuming than a handshake. I do a lot of selfies. I’ll do maybe 150 of them today.”

He’s hoping to meet the festival’s guest of honour, Mark Hamill, and wonders what to say to him. “I don’t want to say something he’s heard a million times. Maybe I’ll try, ‘May the gale force be with you.”

Betty Small has a hip flask of brandy in her handbag. ‘You’d need a nip of something,’ she says. ‘The legs get cold standing out here’

It’s pretty windy, with flurries of snow. At 10am the early risers are already taking positions along the metal barriers. “Preparation is key,” says Paul Scarff. He’s standing across from the Savoy cinema with his wife, Niamh, their children, Adam and Orla, and Orla’s friend Rebecca. They’re in “six layers of clothes”, green face paint and illuminated green novelty glasses and have brought umbrellas, chairs and bags filled with sandwiches, water and crisps. “But they wouldn’t let me bring my lightsabre,” says Adam, still feeling the injustice.

Betty Small, a Ringsend woman who has lived in south Wales since 1961, has come back for the parade every year, this time with her Welsh friends Jane Wilcox and Joyce Price. “I just love seeing all the children dressed up,” she says. She knows to be at the barrier early and to have a hip flask of brandy in her handbag. She opens her bag and offers me some. Wilcox and Price show me that they have tiny green cups hanging amid the garlands of fake shamrocks around their necks. “For the brandy,” explains Price.

“You’d need a nip of something,” says Small. “The legs get cold standing out here.”

Nearby cheerleaders from the University of Illinois’s Marching Illini huddle together for warmth. “It should be okay when we’re moving,” says Caitlin Grant unconvincingly.

As the day progresses the street fills with people in leprechaun hats, face paint and novelty sunglasses. The best way to hide today, in fairness, is to dress as a leprechaun, although some internationalists are content to stand out. Six lederhosen-clad Bavarian butchers are here to compete in the World Butchers’ Challenge, in Belfast. And I see a Mexican man in a sombrero embracing an Englishman dressed as a bride. “My wife! My wife!” he cries.

The Game of Thrones star Liam Cunningham recalls watching the parade with his father, so he couldn’t quite believe it when they asked him to be this year’s grand marshal. “I said, ‘Marshal? Do I get a six-shooter and a badge?’ ”

He is hugely honoured to have been asked, he says. He works with Syrian refugees, and for him the internationalism of the parade is very important. “And I thought my mother would burst with pride . . . She treated it like the third secret of Fatima . . . If I had a choice of winning an Oscar or being grand marshal for the St Patrick’s Day parade I’d pick this. You only get to do this once. Sure you could win an Oscar any time.”