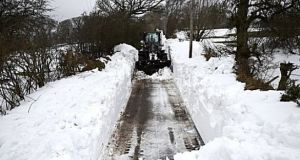 Staff in local authorities who worked during the recent severe weather are to seek additional annual leave.

Gardaí are also to consider on Thursday whether they will look for additional days off for working during the recent snow storms.

The moves follow the decision of the HSE last weekend to provide additional annual leave for health staff who went to work during the bad weather.

The trade union Siptu is also seeking the Government to introduce a a protocol “outlining a uniform response by local authorities to extreme weather events” in the future.

Siptu said on Wednesday that “in particular, there should be proper remuneration for those who work extra days and hours during such crises, as has been agreed with workers in the health service over recent days”.

The Irish Times reported on Monday that the HSE had agreed personnel who went to work on red-alert weather warning storm days would be paid for time worked and receive time off in lieu in addition.

All HSE staff are to be paid as normal for the period of the bad weather including those who could not get to work or whose place of work was closed due to the red-alert weather warning .

The executive of the Garda Representative Association (GRA), which represents about 10,000 rank-and-file gardaí , is to consider on Thursday whether it will seek similar additional leave arrangements for its members who went to work during the severe weather.

Siptu sector organiser Brendan O’Brien said the union’s members in the local authorities had worked tirelessly throughout Storm Emma to clear roadways and other public spaces in order to get the country moving again as quickly as possible.

“They are also currently engaged in emergency repairs to damaged water infrastructure caused by the extreme weather event. In addition, our members in the fire services ensured that a full emergency fire, ambulance and rescue service was maintained throughout the red alert weather period.”

“The recent emergency highlights the requirement for the Minister for Housing, Planning and Local Government to ensure that local authorities are properly resourced and staffed in order to respond to such extreme weather events in the future. There should also be an agreed protocol as to how staff will be remunerated for the extra work involved and for those who are unable to attend their employments due to adverse weather.”

“Unfortunately, it is predicted by scientists that such weather events will become more frequent in the years ahead due to climate change, resulting in our members being called upon to deal with the consequences on a more regular basis.”