Asked about coalition with Sinn Féin, Ryan says party could not afford to engage in politics of refusal 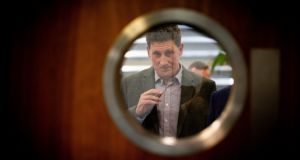 Green Party leader Eamon Ryan: ‘If the Irish people are to elect people, who are we to say “We won’t talk to you’ – we need to respect the voters.’ Above, at the Irish Farm Centre last week. Photograph: Tom Honan for The Irish Times

Green Party leader Eamon Ryan has warned the major parties that anyone seeking to go into coalition with the Greens will need to seriously address Ireland’s carbon emissions if they are to secure their support.

Mr Ryan said addressing climate change was “a red line issue” for the Green Party but, to date, none of the three larger parties appeared to be addressing the issue in a real and honest way.

“I have to say the climate change issue hasn’t really featured much in public debate so far – when you look at the choice for change, Fine Gael have set their climate action plan for a 2 per cent reduction but that isn’t ambitious enough.

“Fianna Fáil and Sinn Féin in their manifestos have just paid lip service to the idea of climate change. They say, ‘Oh we’re all interested in that subject’ but they provide nothing to make the scale of the leap we need to make.”

Mr Ryan said that if the Green Party is returned with a significant number of TDs, it will insist that any potential coalition partner meets its demand to meet EU carbon emission reduction targets by 2030.

“If we’re in any sort of talks with anyone if people elect us in the numbers we hope, then we will be saying ‘Let’s be honest here now, a 7 per cent reduction in carbon emissions per year is needed’.

“That’s what the European Union is saying we have to do to avoid starting paying fines which could be €7 billion in the next decade and ramping up from there if we don’t meet those targets.”

Mr Ryan, who was speaking at a press conference attended by the party’s five candidates in the five Cork constituencies, said the Greens could win up to 15 seats if the polls are to be believed.

“I think if the polls are right and we’re running at between 7 per cent and 10 per cent, if that turns up on Saturday, I think we could win up to 15 seats around the country and I think we should be looking for at least four of those in Munster.

“I think it’s absolutely doable – we are really well organised and we are united – our membership has doubled in the last year and we have a really top team of 39 people who are quality candidates from all walks of life.”

Asked whether he would have any difficulty going into coalition with Sinn Féin, Mr Ryan said he believed the climate change crisis facing Ireland was so huge that the Greens could not afford to engage in the politics of refusal.

“The scale of change we need to make on climate in two decades is so huge it changes everything – our energy system, our food system, our transport system, our waste system – what we have to do is beyond compare.

“We won’t achieve that if we play this as a divisive politics game, right versus left, rural versus urban or young versus old and that drives us to say we will work with all parties, we will work with whoever the people elect.

“We believe in this democratic constitutional republic and I believe in and stand by this State, warts and all, and if the Irish people are to elect people, who are we to say ‘We won’t talk to you’ – we need to respect the voters.”