Cocaine in Galway: ‘It’s not snowing, there is a blizzard’ 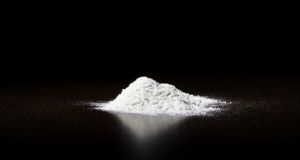 A HSE addiction specialist has described the drug problem in Galway as the worst he had seen in his 28 years working in addiction services in Ireland, the UK and Australia.

Speaking about the use of cocaine at a Co Galway Joint Policing Committee (JPC) meeting on Monday, HSE clinical specialist in addiction Joe Treacy, said “it’s not snowing in Galway, there is a blizzard”.

He said recent screenings of drug users in the county revealed cocaine with a potency of up to 94 per cent and a strain of Moroccan cannabis with previously unseen levels of THC (the main psychoactive compound in the drug).

Chairperson of this subcommittee, Cllr Michael Maher (Fine Gael), said later random drug tests could not be introduced into schools without the cooperation of school principals and parents.

He said he believes there is an appetite amongst teaching staff and parents to tackle this issue. The Loughrea councillor said he plans to bring forward proposals for a pilot drug testing programme through the Galway Roscommon Education Training Board (GRETB), of which he is chairman, in coming months.

“This is something that we could start through GRETB on a pilot basis and then bring it to Education and Training Board Ireland and see could we make this into a national thing,” he said.

“I’m sure that hundreds of parents out there would not mind their children being tested for drugs. I think 95 per cent of parents would allow this to go ahead”.

Speaking on the proposal to introduce random drug tests in schools, Cllr James Charity (Independent) said any move in this direction would be unconstitutional.

“As things stand at the roadside, you [a Garda] need to have a genuine suspicion before conducting a drug test. I think a proposal [for drug testing in schools] would be unconstitutional.”

Addressing the extent of the drug problem Mr Treacy said: “It is not snowing in Galway, there is a blizzard. The purity of the cocaine we are seeing here is very high, it’s 93 or 94 per cent. It costs just €15 to €20 for a screening test.

“If we drug tested everybody on a Monday morning, we would have a lot of red faces. It is so easy to access drugs at the moment. I don’t know of any village or small townland that drugs have not invaded.

“I’ve been working in this area for 28 years and [the drug problem in] Galway is the worst I have ever seen. It is quite shocking. The level of criminality, the level of drug abuse, it’s very shocking. There will be a lost generation if we don’t engage with this as quickly as possible. The proliferation and the availability of drugs has never been as bad.”