Interview: FF deputy leader 'not being complacent', but tipped to top Mayo poll 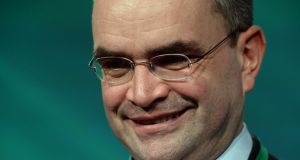 Fianna Fáil deputy leader Dara Calleary: ‘I love this place. I love this town,’ he declares. ‘I love this county. I am so lucky to be living here.’ File photograph: Cyril Byrne/The Irish Times.

In his hometown of Ballina in Co Mayo, Dara Calleary is trying to paint the bigger picture.

Fianna Fáil’s deputy leader is outlining the challenges facing the local area and the wider constituency in between knocking on doors in the Parkside area.

He says that if the district hospital was put to better use, it would take the pressure off larger hospitals in Castlebar and Sligo. If there were more than five members on the area’s Garda drugs squad, the underlying and sometimes unspoken drugs problem could be tackled more forcefully, Calleary adds.

And if broadband was rolled out properly instead of in a haphazard fashion, businesses might not have to close down.

“It’s about connecting the dots,” he says.

Calleary has a strong national profile and is well-liked by colleagues within his party and outside of it. He’s a third-generation politician. His grandfather, Phelim Calleary, was a TD for Mayo North from 1952 to 1969 and his father, Seán Calleary, was TD for Mayo East from 1973 to 1992.

This is Calleary’s first election without the support of his father, who died in 2018. Many locals, when asked who they will vote for, reference Seán and the impact he had on the county.

It’s clear that Calleary is finding it tough being on the campaign trail without his father, but given the scale of the job at hand – it can take two hours to cross the constituency by car – he has plenty to keep himself occupied.

“Best of luck, although you’ll get in anyway,” says one woman absentmindedly.

Calleary shrieks “no” with horror and reminds her that he is not being complacent: “I need the votes.”

Newstalk’s Ivan Yates had that morning predicted that Calleary would top the Mayo poll, which appears to have induced a degree of expectation-related anxiety.

The old idiom that all politics is local rings true in Ballina but one voter is keen to tackle the national picture, so Fianna Fáil’s economic legacy is addressed for the first time in the canvass – albeit in a non-confrontational way.

“I’m looking at the campaign a lot, more so this time,” says Eamonn Wynne on his doorstep. “I think we need change and to progress forward. There is no point looking back any more. Learn the history from it and move forward. You can’t just keep bringing it up and throwing it at people.”

Calleary says his party wants to learn from the past and bring “a new energy and zip into government”.

Wynne says he believes the Irish public have a choice between lower taxes or better public services.

“It’s very simple. If we want proper services, it is going to be like the Nordic areas,  and they pay a higher tax. You can’t say we want tax breaks and we [also] want better services,” he says.

Calleary nods in agreement: in the Fianna Fáil manifesto the party has committed to a 4:1 split in favour of investment in public services over tax cuts.

Fianna Fáil is also hoping to hold a second seat in Mayo for Lisa Chambers, the party’s Brexit spokeswoman. She was also an outspoken voice on the campaign to repeal the Eighth Amendment.

Calleary, on the other hand, was probably the highest profile member of Fianna Fáil to back the amendment’s retention, and he isn’t overly keen to talk about the subject. When asked if it has come up on the campaign trail, he says “no it hasn’t, not really” before changing the topic to the issue of drugs.

Later he says that “for a lot of people it’s personal,” and so he doesn’t expect them to bring it up. He points to childcare, instead, which he says is a big issue for families and people working in the industry.

Fianna Fáil has proposed increasing the universal childcare subsidy from €20 a week to €80 a week. If childcare providers simply choose to pass that cost back on to the parent, the party says it will introduce legislation to cap prices.

He concedes, though, that this could be “difficult to do”.

Housing, of course, features too. Because of a lack of new local authority builds, the waiting lists are increasing. The latest figures show that there were 1,205 people on the social housing waiting list in Mayo last year, a slightly increase on the figure for 2018.

Around 120 people on these waiting lists have some form of disability and Calleary says most of the complaints and queries he receives on housing are about the waiting lists.

He is hopeful that come polling day, the Fianna Fáil focus on health, housing and childcare will be the message that wins the day instead of the Fine Gael contention that they are the only ones who can be trusted with the economy and with Brexit.

He maintains that Brexit is not the main issue coming up on the doors.

“There’s an awareness,” Calleary says, “but no panic.”

Wynne concurs: “It’s an issue, it’s a problem, but we will overcome it.”

In the meantime, there are hundreds more votes potentially up for grabs and time is of the essence. Calleary finishes his first canvass of the evening in high spirits.

1 Coronavirus: No swift return to ‘normal state of affairs’, warns expert
2 Growing hope in Government of partial easing of restrictions after May bank holiday
3 Coronavirus: Ireland will have to ‘live alongside the virus’
4 Chief medical officer urges people not to visit hardware stores
5 Government should question necessity of passenger flights – Immunology expert
Real news has value SUBSCRIBE