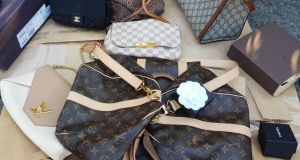 The Criminal Assets Bureau (Cab) has brought 10 new proceeds-of-crime cases before the High Court following a flurry of activity towards the end of last year, it has emerged.

When Cab raided the suspects’ homes a bedroom in one house was being used as a walk-in wardrobe, due to the quantity of designer clothing and accessories, such as handbags, which two of the suspects had bought.

When the goods were valued by Cab, with a view to their resale on the second-hand market, they were deemed to be worth almost €70,000.

The details of the new separate investigations across the country will not become clear until the cases are further progressed through the High Court. This may take some time as such a large number of new cases in one month is unprecedented.

However, The Irish Times has established the actions being brought are against those involved in drug dealing and illegal money lending, as well as a man who sold what he claimed was a treatment for cancer.

The four people who own those assets are two brothers from west Dublin and their partners.

Another man under investigation, for €10,000 in cash, is closely linked to one side of the Drogheda feud and lost a brother in a gangland shooting over a decade ago.

The female money lender being targeted is in her late 30s and Cab has begun efforts to seize three properties from her with a combined value of between €300,000 and €400,000.

A man who had been presenting himself as a doctor who could cure cancer is among the cases, with almost €230,000 in cash being seized from him.

The money was found during a search on his property and Cab’s case was expected to set out how treatments claiming to cure cancer were sold to terminally ill people and the parents of children with cancer.

Another man, from Co Sligo, who has long been involved in violence and drug dealing in the area faces losing his house as Cab believes it represents the proceeds of crime.

A man suspected of being involved in the drugs trade and in money-laundering via the dark web is at the centre of a Cab inquiry that seeks to confiscate some €1.7 million in bitcoin. The Galway man in his late 40s is a convicted cannabis dealer already previously targeted by the bureau.

A suspected drug dealer based in Cavan is at the centre of other action which seeks to seize a log cabin, a Rolex watch valued at €13,500, an X5 BMW and a horse box.