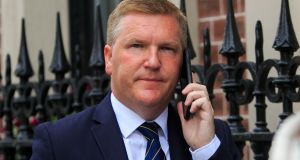 Minister for Public Expenditure Michael McGrath updated the Cabinet on the issue of public service pay ahead of the engagement between his officials and senior ICTU figures. Photograph: Gareth Chaney/Collins

Trade unions and officials of the Department of Public Expenditure are expected to meet again later this month to discuss the potential for a new pay deal for 340,000 State employees.

Initial talks between the two sides which took place on Tuesday were described as “exploratory”.

Minister for Public Expenditure Michael McGrath had earlier updated the Cabinet on the issue of public-service pay ahead of the engagement between his officials and senior figures of the public-service committee of the Irish Congress of Trade Unions.

It is understood that Mr McGrath told Ministers that informal exploratory discussions were beginning with trade union representatives “to establish whether there is a basis to move to formal negotiations on a possible successor to the current pay deal”.

The Minister said he would keep the Cabinet informed of developments in the weeks ahead.

A spokesman for Fórsa, the country’s largest public-service trade union, said the talks had been “exploratory” and the parties would meet again.

Further discussions are expected to take place before the end of September.

The current public-service agreement – which covers pay for 340,000 staff including nurses, doctors, other healthcare workers, teachers, civil servants, local authority employees, gardaí and Defence Force personnel, will expire at the end of the year.

The Minister said in July that the Government would honour the terms of the current public-service pay agreement including a final 2 per cent increase which is scheduled for October 1st.

The payment of this increase had been criticised by some commentators given the impact of the Covid-19 pandemic on public finances.

Apart from the pay rises due in October, the Government is also scheduled to unwind previous cuts made under financial emergency legislation to the pay of higher earners – those receiving up to €150,000 – between October and next July.

Briefing documents drawn up by the Department of Public Expenditure in June for Mr McGrath said the gross public-service pay bill would be about €19.7 billion this year.

The briefing material said the public-service pay bill had been increasing by about €1 billion annually over recent years. It said about a third of this increase was due to wage rises under public-service agreements.

It said two-thirds of the rise in the pay bill was accounted for by increases in the number of staff in the public service, which it said was increasing by about 9,500 per year.