Trade union movement accuses Doherty of being imprudent on self-employed 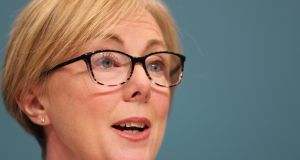 The Government ignored repeated warnings about the implications of increasing the State pension age, the Irish Congress of Trade Unions (Ictu) has said, adding further pressure on Taoiseach Leo Varadkar on the issue.

The trade union movement also accused Minister for Social Protection Regina Doherty of being “completely imprudent” in providing social welfare benefits to the self-employed at a significantly discounted rate.

Mr Varadkar pledged at the weekend to deal with the pension gap for those who are contractually obliged to retire before the age of 67 – the qualifying age for a State pension from next January – following a public backlash over the issue.

On Monday, Fianna Fáil confirmed its plans to outlaw contracts that force workers to leave their jobs at 65.

The party’s spokesman on social protection Willie O’Dea said restoring the pension age to 65 would cost €620 million a year, according to the Government’s own figures.

This included an estimated bill of €150 million annually if a transition pension was put in place to cover those forced out of their jobs at 65.

Ictu general secretary Patricia King described as “wholly unacceptable” the Government’s plan to extend the qualifying age for receipt of the State pension to 67 from 2021, and to 68 from 2028.

Ms King said “the pension issue had been raised by Ictu as a matter of grave concern as far back as 2011 when the change was first proposed and consistently thereafter with various government Ministers and the Taoiseach.

“However instead of heeding our warnings to pause an increase in the pension-qualifying age, the Government proceeded with strategies which can only serve to deplete the social insurance fund”.

Ms King said “a direct employee, combined with their employer, must pay at a PRSI contribution rate of up to 14.95 per cent, and it was completely imprudent of Minister for Social Protection Regina Doherty to extend 93 per cent of all social insurance benefits to 350,000 self-employed people for a contribution rate of 4 per cent”.

She said this covered only 24 per cent of the benefit cost to the State. She predicted that measure would cost the state €413 million by 2025.

Ms King said Ms Doherty also chose to ignore the advice of the Government’s tax strategy group, which recommended that self-employed people should pay a proportionate contribution of up to 12 per cent towards their pension and other social welfare benefits.

Ms Doherty on Monday said the move to increase the pension age stemmed from a 2007 review of the Social Insurance Fund fund that paid pensions. There were now more pensioners than workers, she said.

“There is a pension time bomb,” she said, and the plan to increase the age at which people got the state pension was introduced “because we need to ensure sustainability”.

Mr Varadkar said Fine Gael, if returned to power, would reintroduce a transition pension which was abolished in 2014 when the state pension age was raised to 66.

Ms Doherty said the thinking behind a reintroduced transition payment was so that people aged 65 who were forced to retire would not be required to sign on until the pension kicks in. “I agree that it’s not fair to have to go on the dole,” she said.