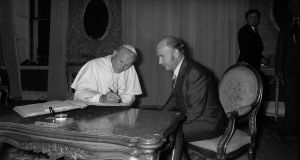 A different Pope, John Paul II, flew in on an Aer Lingus plane to a different Ireland for the papal visit at the end of September 1979.

It lasted three days and 2.7 million people, almost half of the population of the island, turned out to greet and meet him.

The present pope, Francis, is coming to a different Ireland next weekend. It is not the same country and we are not the same people.

The Ireland of 2018 is such a world apart from the place it was 39 years ago that it is a foreign country: politically, socially, morally, ethnically and culturally. The outside, even the inside, observer would hardly recognise it.

There was no internet, no Luas or Dart, no mobile phones.

Ireland’s was a homogeneous society with very few people of different ethnicities to be seen on the streets. County councils were building good quality houses that have stood the test of time. There were big corporate donations to politics. The conventional family had a husband, a wife and four, if not many more, children.

Gays were underground, the most notable pick-up point in Dublin being the men’s public toilet on Burgh Quay. Condoms were a prescribed product, often hidden under chemists’ counters in small towns.

There was no child abuse. The carnality of senior clergy, which so undermined the authority of the Catholic Church, had yet to emerge in public. So had the cover-ups.

These are only a sample of the major transformation in Irish society over the last 39 years since the Polish pope’s visit.

Fianna Fáil was in power in 1979 in the last majority single party government probably ever to be seen in Ireland. Jack Lynch was taoiseach. He had won a 20-seat majority two years beforehand, the biggest in the history of the State.

He felt compelled to try to reconcile in his cabinet the personal and political fall-out from the 1970 Arms Crisis.

George Colley was tánaiste, minister for finance and the public service. Lynch brought back Charles J Haughey as minister for health and social welfare while his Arms Trial adversary, Jim Gibbons, was minister for agriculture.

Des O’Malley was minister for industry, commerce and energy and Brian Lenihan was minister for fisheries. Dr Martin O’Donoghue was piloted into a new ministry for economic planning and development.

Ireland in 1979 was, by any standards, a conservative, Catholic-dominated country with a plentifully-populated clergy

There was no woman minister in the cabinet. There had only been one in the entire history of the State at that point: Countess Markievicz, who was minister for labour in the first Dáil.

There was no woman who had become president either. Candidates were put forward exclusively by the political parties. The county councils did not use their nominating powers.

There were no women working as political correspondents.

In 1979, the president was Dr Patrick Hillery and that September, shortly before the papal visit, he called the editors of national newspapers to a briefing in Áras an Uachtaráin.

This would have been unusual, indeed exceptional, because the president was remote from the media.

It appears from those who attended the briefing that that there had been an article in Hibernia magazine and a whispering campaign suggesting there was a woman in Brussels. Hillery had been the first Irish commissioner in the EEC, with the portfolio of social affairs from 1973 to 1976.

It was believed that Charles Haughey had put out this rumour to destabilise the close relationship between Lynch and Hillery in the wake of the Arms Crisis.

Douglas Gageby, then editor of The Irish Times, was at the briefing and he came back to the newsroom to say that the president had told them that there was no other woman.

He said he had suggested that the president should call in the political correspondents to tell them. Editors were editors then: they didn’t write stories.

And so, the political correspondents were invited to the Áras for a briefing a couple of hours later. Being all men, of course, they were too embarrassed to ask prying questions. Hillery left the room and rang his wife, Maeve, who was away in Spain, during the briefing.

Haughey was on his way to challenging Lynch’s leadership at the time of the papal visit. He beat George Colley to become leader of Fianna Fáil and taoiseach at the end of the first week that December.

The most interesting aspect of the Hillery story is that Seán Duignan, RTÉ’s political correspondent, left the Arás in time to report the president’s briefing on the RTÉ News at 9pm.

But Hillery had not told the political correspondents by the time he left that it was all off the record. The public was gobsmacked.

These events do not do justice to the politics of 1979. We were a decade into 30 years of the Troubles. It was before the hunger strikes, the New Ireland Forum and the Anglo-Irish Agreement in November 1985 that set the template for everything that happened afterwards.

The agreement stated that there would be no change in the status of Northern Ireland without the consent of a majority of the people there.

The John Hume-Gerry Adams talks about the peace process hadn’t even begun. It was becoming Hume’s political mission to convince Sinn Féin and the IRA that they could achieve their aim of a united Ireland by political rather than paramilitary means.

These were the circumstances when the first pope came to Ireland in 1979. He made a particular point, in his perfectly scripted speeches delivered in English, with a considerable cúpla focal in every single one of them, to say in Drogheda that his message was peace and reconciliation.

“On my knees I beg you to turn away from the paths of violence and to return to the ways of peace,” he said.

Ireland 39 years ago was, by any standards, a conservative, Catholic-dominated country with a plentifully-populated clergy. There was a high level of church attendance. There were no Educate Together schools.

The Berlin Wall was yet to come down a decade later and we became a multicultural society when the eastern European bloc of countries joined the enlarged European Union in 2003.

There was no political demand nor compelling demand to tackle the social agenda 39 years ago, apart from the pioneering work of Senator Mary Robinson and the lifetime campaign by David Norris to decriminalise homosexuality. The Women’s Political Association and other women’s aid groups had been formed.

As minister for health and social welfare, Haughey had successfully steered the 1979 Family Planning Act through the Oireachtas. He was derided for describing it as “an Irish solution to an Irish problem” but he did put an Act on the statute books.

A doctor’s prescription was required to obtain a condom in a pharmacy. The first attempt to legalise contraception had failed in 1974 when the then taoiseach, Liam Cosgrave, leader of a Fine Gael-Labour Coalition, voted against it in a free vote. The Bill had been introduced by his minister for justice, Patrick Cooney, who advocated that single people had no right to contraception. “I do not accept that there is any such right because that implies a right to fornicate and in my opinion there is no such natural right,” Cooney said.

The Catholic Church was supported by Haughey’s Fianna Fáil party in opposing many social changes in the earlier years. There were two divorce referendums, the Judicial Separation Act, civil partnership, gay marriage and up to five abortion referendum questions before the electorate decided to approve the availability of a limited abortion regime this year.

Yet, it will not be these developments that will define the position of the Catholic Church as Pope Francis comes to Ireland.

As he prepares to meet Leo Varadkar, our first gay Taoiseach, how does the pope deal with homosexuality being “objectively disordered” in the eyes of his church?

Another challenge for Francis and his hierarchy is how he deals with the issues raised by former president Mary McAleese in recent times.

There was the child abuse, as there was everywhere in the Catholic world. There were the mother-and-baby homes that often exported babies; there were the industrial schools; the Tuam babies, the Magdalene laundries.

But, what damaged the church beyond repair in Ireland was the passage of abusing priests from one diocese to another around the country and the recent disclosure in The Irish Times that the Vatican wanted to suppress the files. The sin of giving scandal was greater in the Catholic Church than the abuse.

And, looking back at a very different Ireland since the last pope’s visit, what would Peter Murphy, son of Bishop Eamonn Casey, and Ross Hamilton, son of Fr Michael Cleary, have to say now?