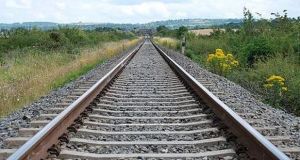 More than two years after it was promised, the Government is reviewing a possible extension of the western rail corridor from Athenry, Co Galway, to Claremorris, Co Mayo.

The review commissioned by Minister for Transport Shane Ross will examine the cost of the project and the potential for development opportunities in the west, according to the Independent TD Seán Canney.*

However, his constituency colleague in Galway East, Minister of State for the Diaspora Ciaran Cannon (FG) believes it is time for the long-campaigned-for-transport project to be abandoned. He says State funds should be put into developing a greenway between Galway and Enniskillen, Co Fermanagh.

Mr Cannon, a keen cyclist, said that the case for extending the rail line north of Athenry to Claremorris made no economic sense.

Even the freight case for the line was now in question, after the company DFDS closed its rail freight service between Waterford port and Ballina, Co Mayo, in June, Mr Cannon said.

Mr Canney has countered that Mr Cannon “cannot as a member of Government pick and choose” what he supports in the Government’s national plans.

Mr Canney said he had “received written confirmation” from the Taoiseach of his commitment to have the independent review undertaken. He said if the findings of the review were approved by Government the project would be prioritised and advanced.

“The Taoiseach has also highlighted that the two phases from Athenry to Claremorris could play an important role in the Atlantic economic corridor,” Mr Canney said. “The project has been described by the chair of the Atlantic Economic Corridor task force subcommittee on infrastructure as a no brainer.”

However, Mr Cannon argues that businesses in Tuam and Athenry are fully behind developing a greenway along the route, which could extend across the Border, with substantial tourism benefits.

Reopening the rail line would “haemorrhage money”, due the cost of development and subsidies, Mr Cannon said.

“Seán Canney needs to decide which is best for his constituents, a completely undeliverable commitment in the programme for government that he personally orchestrated, or the delivery of an amenity that will transform our towns, our villages and the lives of our people,” Mr Cannon said.

Mr Canney said there was scope for “both greenways” and reopened rail links, and said that both Brexit and commitments to tackle carbon emissions made for an even more compelling case for the rail line.

He said he believed estimated costs of €200 million were “over-exaggerated” and it could be done for “half that”.

Mr Canney secured a commitment in the May 2016 programme for partnership government for “an independent costing and review” and a pledge that “no measures will be taken to prevent the future reactivation of this corridor for rail use, as set out in the McCann report”.

The 2005 McCann report commissioned by late Fianna Fáíl minister for transport Seamus Brennan had recommended reopening most of the corridor in three phases.

After the new Fine Gael-led coalition shelved the Transport 21 strategy in 2011, the project had been in abeyance – with then minister for transport Leo Varadkar also deleting it from the EU’s Trans-European Transport Network (Ten-T) programme for cross-border projects.