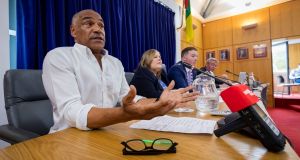 Kevin Sharkey and others at Carlow County Council meeting: “Ireland should come first – that’s not to exclude anyone, that just makes common sense.” Photograph: Dylan Vaughan

But really, does it make a blind bit of difference who we install in the Áras for the next seven years?

The winner just has to be presidential.

It should be a simple process. But it’s far from it.

There is a queue of contenders who think they have what it takes to do the presidential thing. The more they expand and expound on their suitability to do the job, the more you wonder. And in some cases, the more you shake your baffled head in wonder.

Four potential candidates travelled to Carlow on Wednesday to ask its county councillors to nominate them for a place on the election ticket.

Two are serious contenders for a place on the ballot in October, one appears a long shot and the last hasn’t a snowball’s chance in hell.

The councillors were polite and welcoming, but they didn’t seem particularly enthusiastic about any of the supplicants who passed their way in the hope of gaining preferment.

At the outset, the chairman pointed out there is still time for more hopefuls to come before them and plead their case. “If I was only five years older I’d be eligible to stand as a candidate,” sighed Brian O’Donoghue (FG), “but I’m not.”

Later on, one councillor mentioned that “another big name” would be declaring for the race at the weekend, but he didn’t say who this person might be.

Nobody in the sweltering chamber bothered to ask.

The two front-runners in this yet-to-be-completed field are businessman Gavin Duffy and Senator and mental health campaigner Joan Freeman. Both arrived with an early-day entourage in tow and each was in possession of a PR big hitter. In Duffy’s case, veteran political adviser, media consultant and field sports advocate, Liam Cahill; and in Freeman’s case, author and communications consultant, Natasha Fennell.

Artist Kevin Sharkey arrived on his own, armed with half a sheet of paper containing his notes. He was very glad of that sheet of paper because he was able to fan himself furiously with it as the heat levels rose.

The last person to throw his hat in the ring was a grey-haired man from Galway called Patrick Feeney, who bamboozled the audience with a very convoluted description of his early years and subsequent work history, from becoming “Juvenile Connaught Boxing Champion: 6st-7” to his years in Aer Lingus via the beatification of Oliver J Plunkett and the revival of the beet industry.

Among the four candidates who each believe they are eminently qualified to contest the election and win, Feeney is the only one who has ever stood before the people. He got 22 votes in the last general election, although he “always wanted to run for Galway County Council but I couldn’t get in there”.

There was major disappointment midway through the afternoon when a fifth declared speaker – Marie Goretti Moylan – failed to show. “She isn’t in the house,” announced the chair, conjuring up thoughts of Elvis.

On the day, it was Sharkey who gave the most arresting performance. Although it was Cllr Arthur McDonald (FF) who put the icing on the cake for him.

Sharkey began his pitch by talking about growing up in Donegal. “I was the only black child there.” He then explored the question “What is racism?”. His presidency would be “a platform for opening up a conversation that we need to have as adults”.

In the question-and-answer session which followed, Cllr McDonald’s query sent eyebrows shooting up and jaws dropping down.

“We live in a country where we elected an atheist President. We have a gay Taoiseach. We’ve brought in divorce and now we’ve brought in abortion. I just wonder,” he asked Kevin, “Do you feel that it’s time for a coloured president?”

Sharkey, who was taken to task by a number of councillors about his references to Ireland being “predominately” white and needing “to have a conversation about immigration”, insisted the colour of his skin had nothing to do with his fledgling campaign.

He also annoyed some of the politicians with his views on US president Donald Trump, who puts American first in the way he [Sharkey] wants to put Ireland first. If nothing else, Trump, who is the democratically elected president, has to be admired for “at his age” giving up “that beautiful wife and those games of golf to put in a few hours and fair play to him is all I would say”.

Those who challenged him and pointed to Ireland’s emigrant experience in America were told that the Irish worked hard, whereas workers coming over from Europe now are coming here “for a support system that is very attractive”.

Sharkey, who twice reprimanded the media for being “lazy”, is treading what seems a familiar political path in the light of Donald Trump’s success. “Ireland should come first – that’s not to exclude anyone, that just makes common sense.”

Sharkey, who twice reprimanded the media for being “lazy”, is treading what seems a familiar political path in the light of Donald Trump’s success

Could he get four councils to nominate him? It seems unlikely, but nothing is impossible these days. A number of councillors noted afterwards that he is a very good speaker. Indeed, he spoke fluently for 15 minutes – not always making complete sense – with only that tiny sheet of paper to guide him.

And so, finally, to Gavin Duffy and Joan Freeman.

Both of them shamelessly soft-soaped the Carlovians about their wonderful county and lovely people before setting out their stalls.

“I believe I have the necessary experience, energy, integrity and vision to bring a new and invigorated presidency,” said Gavin, who has a “signature initiative” as his USP (unique selling point). This is his president’s international youth corps, where young people will travel Ireland and do “a tour of duty abroad” helping their fellow men and women.

Sort of gap-year missionaries, without the religion.

Covering all the bases, his presidency will be founded on “five pillars” of Youth, Age, Diversity and Inclusion, Respect and The Economy. Gavin wants to “just put a bit of verve into people”.

All the individuals he has dealt with over the years – from political and business leaders and people in the wider community – have one thing in common: “They have a dream of making a difference.”

Not surprisingly, Joan Freeman will host a summit on mental health.

She was quietly impressive, not making any big promises. She would focus on and promote issues in the way Mary McAleese spoke of building-bridges presidency and Mary Robinson looked to the dispossessed.

“I am accused of being a one-trick pony” she said. “But that trick is very big.”