Monaghan nun in UK warned of ‘weird, uncanny silence’ from Ian Paisley ahead of visit 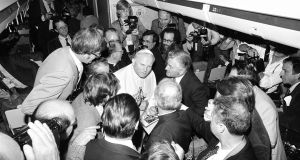 Members of the public wrote to then taoiseach Jack Lynch ahead of the visit by Pope John Paul II to Ireland in 1979 expressing concern for his safety and that an attempt might be made on his life.

Files held in the National Archives in Dublin contain correspondence about the papal visit, including poetry in the pope’s honour, and pleas for assistance getting tickets to the official events.

A typed letter from a Monaghan-born nun in a nursing home in the UK said she and many others over there were “very worried” about the pope’s safety during his visit.

“What really worries me and others, Irish and English, is the weird, eerie, uncanny silence of that awful [Ian] Paisley man,” she wrote.

“One feels safer when Paisley is bawling, barking, ranting and raving because he is letting off steam but this deafening silence forbodes trouble of some kind. The man is mad but madmen are crafty and he has followers – Loyalists. Loyal to what? – the coin, not the Crown; money not the monarchy.”

Sr D Bogue wrote that “hating the pope as he does”, Mr Paisley was “capable of anything”.

“He is making plans or as is often said, making balls for fools to fire.”

“Think of Ireland’s shame if any harm befell Our Holy Father on Irish soil. Please do all in your power to safeguard the pope, there is no need to ask you to do that. Guard every entrance from the six counties, roads, lanes, fields leading into the Free State right now, not just while the Pope is in Ireland – that could be too late.”

The letter adds: “People must prove they are who they say they are, and if necessary undergo the same checks I and every nun and everyone has to undergo at Heathrow before we board a plane for Ireland.”

“These precautions, although unpleasant, are necessary with all the bombings and murders that are taking place. It is an awful thought that it only needs one crack shotsman to kill the world’s greatest and most noble, saintly man, Pope John Paul II. I feel everyone must be on the watch-out for someone in the dense crowds, to aim at the Pope and be prepared to sacrifice their life, if necessary, for the Holy Father.

“Prayer will save our Pope but every precaution must be taken so that no enemy can slip through the net – times can be altered a little, decoy planes used to put would-be killers off the scent.”

A Mrs Mary Bridget Evans from Hounslow in Middlesex wrote to Mr Lynch on September 9th after reading an article in the Sunday Mirror newspaper.

Mrs Evans, originally from Westmeath, had recently lost her husband, who was formerly in the RAF.

“Death is a terrible final thing and I do not understand the people in Ireland wanting to see people dead. I met Earl Mountbatten last year with Barbara Cartland at a health food fare at the Royal Lancaster Hotel Lancaster Gate. I spoke to him now I am broken hearted at his passing.”

She went on to express concern at reported threats on the pontiff’s life.

A reply from the taoiseach’s private secretary S Aylward said the taoiseach had asked him to assure her “that everything possible” would be done to ensure his safety.

A correspondent from the Navan Road in Dublin to say they did not know what protocols were involved in the case of the pope’s arrival, but “in a country that is pestered and plagued by guns a gun salute would, I submit, be inappropriate”.

“Would it be possible to get 21 units or sets of pigeons to fly to the six counties as a symbol of peace and as a gesture of appraisal for the distinguished man of peace?”