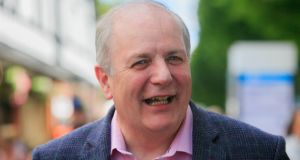 Two presidential candidates have indicated they would seek only one term if elected and pledged to extend Freedom of Information (FoI) to the office.

Gavin Duffy and Joan Freeman said they believed one term in the office was sufficient, with Ms Freeman adding it should be reduced to five years.

Mr Duffy outlined his belief that seven years was enough time to spend in one job, but then added he would make his decision on a second term known in the sixth year of his tenure.

Both candidates also told Carlow County Council the office of the presidency should come under the FoI Act, with Mr Duffy committing to publishing the information regardless of whether there was legislative change.

Travel, accommodation and catering costs should be published but certain correspondence and internal discussion should not be released, Mr Duffy said.

This would include conversations with parties in Northern Ireland as that could result in “megaphone diplomacy”.

Meanwhile, artist Kevin Sharkey indicated he would have voted for Donald Trump in the US presidential election because he has not “killed as many as the rest of them”.

Mr Sharkey said he believed the media must come to terms with Mr Trump’s election and likened the US president to actor John Wayne . Mr Trump gave up “that beautiful wife” and playing golf to enter office, he added.

“He [Trump] hasn’t killed as many as the rest of them, but that’s the vote. You may not like him, but I would rather a boss who got the job done than a boss who was a nice man. He was elected president and we need to get over it. He swaggered in and was like ‘Where are the broads at’.

“Trump isn’t any more likeable or unlikable than any of the other US presidents. We had Bush and his father,” Mr Sharkey said.

Mr Sharkey also told the meeting it was his belief that Irish people should be prioritised in Ireland, adding Ireland needs to “wake up” to immigration

Fianna Fáil councillor Arthur McDonald questioned Mr Sharkey on whether it was time for a “coloured president”.

Ireland has an atheist president, a gay Taoiseach and had brought in legislation to implement divorce and abortion, Mr McDonald.

In response, Mr Sharkey said he did not believe his colour should form part of the discussion, adding he had experienced racism throughout his life.

Four budding presidential candidates appeared before the council.Independent candidates require the support of four local authorities or 20 Oireachtas members to contest.The council is expected to make its decision next month.

Sean Gallagher meanwhile is “actively considering” a second run for the office of president and will announce his intentions within a fortnight.

The businessman ran in the 2011 presidential election but was defeated by President Michael D Higgins.