Papal apology for clerical abuse ‘needs to be more than sorry’ 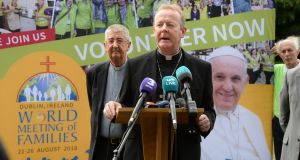 Archbishop of Armagh, Eamon Martin: I’m not sure that a simple apology is what survivors of abuse want. Photograph: Dara Mac Donaill / The Irish Times

Archbishop Eamon Martin has said that any apology Pope Francis makes to clerical sex abuse victims during his visit to Ireland “needs to be more than ‘we’re sorry’”.

The Catholic Primate of All Ireland said he expects the Pope to meet victims of clerical sex abuse during his visit to Dublin.

Pope Francis arrives in Dublin on August 25th for a visit based around the World Meeting of Families, and he will also go to Knock, Co Mayo, during the 36-hour visit.

Speaking to the BBC, Archbishop Martin said he would be “surprised” if the pontiff did not meet abuse victims.

Describing clerical sex abuse as “sinful and criminal”, he said: “I would like to think that the Pope will meet with survivors of abuse but will also address this issue in some way during his presence among us.

“I’m not sure what his words will be, and I’m not sure that a simple apology is what survivors of abuse want,” Archbishop Martin said, adding: “They themselves are on record in recent days as saying they want action.

“They say they want to know that the Church accepts that abuse within the Church was systemic, that it was facilitated and that this will happen no more.

“If he expresses an apology, it needs to be more than ‘we’re sorry’,” Archbishop Martin said.

“I think he will reach out, he will try to express the grave sorrow of the Church. But I think people want more than that,” he told the BBC.

The archbishop’s comments come as the Vatican expressed “shame and sorrow” for sex abuse by priests in its first response to a US grand jury report published last Tuesday.

The Pennsylvania grand jury found that more than 1,000 children in six dioceses there had been molested by 300 Catholic priests over the past 70 years while senior church officials took steps to cover it up. The grand jury said it believed the “real number” of abused children there might be “in the thousands”

“Mrs Foster appreciates the invitation but regretfully will be away with her family at that time.
“She particularly acknowledges the significance of this event for many Roman Catholics in both the Republic of Ireland and Northern Ireland.”-

Abuse survivor Marie Collins, who last year resigned from the Vatican Child Commission, maintains that the Pope has to say what he is going to do about the issue of clerical abuse.

She said she hopes that the Pope will meet abuse survivors when he visits Ireland next weekend and that they will be able “to challenge him and demand what is necessary. We’re way past apologies.”

Ms Collins told RTE’s Today with Miriam that decades have passed since the issue had come to light and the Vatican “is still hoping that it will pass.”
She pointed out that the Vatican City itself does not have a child protection policy despite the hundreds of children that pass through the city every day through seminaries and choirs.

“It is beyond belief that the church still hopes that this will go away.”
When asked about recent measures that were taken in the US to counter clerical abuse, she said “if it is recognised that the US policies are so effective, why haven’t they brought them to every where. That seems negligent.”

Ms Collins said it was time for the Pope to say what he is going to do about tackling the issue. “No more promises, the church has to be held accountable.”
She added that she was disappointed that she will not get to debate with Cardinal Seann O’Malley, chair of the Vatican’s Commission for the Protection of Minors who has announced he will not be attending the World Meeting of Families (WMoF) in Dublin.

Archbishop of Boston Cardinal O’Malley was scheduled to chair a discussion on Safeguarding Children and Vulnerable Adults at the WMoF on Friday August 24th. The panel includes Ms Collins, who resigned from the Commission for the Protection of Minors last year in protest at the frustration of its work by Vatican officials