Mr Hook said he wanted to “apologise unreservedly for comments” he made about a woman’s "personal responsibility" in an ongoing rape case in the UK. 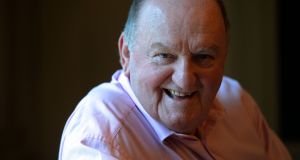 ‘But is there no blame now to the person who puts themselves in danger?’ George Hook said. Photograph: Eric Luke

Broadcaster George Hook has apologised for comments he made on his radio show about a rape case, for which he received a lot of criticism.

In a statement, Mr Hook said he wanted to “apologise unreservedly for comments” he made about rape on his Newstalk radio programme on Friday.

“It was unacceptable to suggest in any way that blame could be attributed to victims of rape. I apologise for the comments which caused hurt and offence, and for this I am truly sorry.”

Newstalk said it has issued “an unreserved apology for George Hook’s comments about rape on the station.”

Station managing editor Patricia Monahan said the comments made by Mr Hook were “totally wrong and inappropriate and should never have been made.”

There was a backlash of criticism following comments made by the veteran Newstalk presenter (76) on his radio show, High Noon on Friday about an ongoing rape case in the UK.

Hook discussed the case of the 19-year-old woman who alleges she was raped by a former member of the British swim team. She alleges that she was raped by the man after having consensual sex with a different man who was the swimmer’s friend.

“She was passed around, went the story. And apparently she went to bed with one guy and he goes out and another guy comes in. She doesn’t want to have relations with the second guy but he forces himself upon her. Awful,” said Hook on Friday’s show.

Mr Hook also said: “There is personal responsibility because it’s your daughter and it’s my daughter. And what determines the daughter who goes out, gets drunk, passes out and is with strangers in her room and the daughter that goes out, stays halfway sober and comes home, I don’t know. I wish I knew. I wish I knew what the secret of parenting is.

“But there is a point of responsibility. The real issues nowadays and increasingly is the question of the personal responsibility that young girls are taking for their own safety.”

His comments have sparked backlash from individuals and human rights organisations on Twitter.

“George Hook’s comments are dangerous, and a perfect encapsulation of rape culture. His comments enable rapists,” said the National Women’s Council of Ireland (NWCI) on Twitter.

Orla O’Connor, the director of NWCI, also tweeted that Mr Hook’s comments are “Victim blaming at its worst and complete ignorance as to its impact on women who have been raped.”

“Rape and sexual assault are serious crimes and victim blaming is unacceptable and damaging,” said Ms O’Connor in a different tweet.

Colm O’Gorman, the director of Amnesty Ireland also said on Twitter, “I get that @NewstalkFM wants to lead on ‘opinion led content’, but @ghook increasingly stupid, ignorant rants are grossly irresponsible.”

Chris Donoghue, the group political editor at Communicorp, a media company that owns Newstalk, tweeted saying, “Someone needs to go to town on Hook. It’s disgusting.”

On Saturday morning, he tweeted again saying: “Thanks for msgs, I’m not trying to be a hero or outspoken. It’s a basic thing for everyone to stand for. Rape is never a victim’s fault.”