Charities and housing agencies give cautious welcome to measures 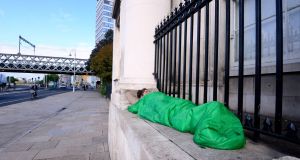 A homeless man sleeps outside the Custom House while the housing summit, hosted by Minister for Housing Eoghan Murphy and attended by Taoiseach Leo Varadkar, was in process. Photograph: Cyril Byrne

Agencies working against homelessness have given a cautious welcome to new proposals announced by Minister for Housing Eoghan Murphy.

Focus Ireland said the meeting between Mr Murphy and local authority managers on Friday had produced a number of positive commitments but it had “failed to live up the excessive expectations created by the decision to bill it as a ‘summit’”.

The charity said it awaited “the full review of Rebuilding Ireland due later this month before any clear new vision emerges”.

Focus Ireland welcomed increased targets for building new social housing and new commitments of funding for mental health and other services from the HSE. It also approved of the increased commitment to preventing homelessness, particularly the new new role for the Residential Tenancies Board in supporting tenants receiving notices of termination.

The Simon Communities of Ireland similarly welcomed the housing first initiative for people with complex and multiple needs, as well as the policy shift at local authority level from acquisitions to direct housing building.

Niamh Randall, spokeswoman for the Simon Communities, said the focus must also be on preventing more people from becoming homeless and supporting those trapped in emergency accommodation to move into homes of their own quickly.

Chief executive Donal McManus said: “Currently, we have multiple schemes delivering social housing on small sites. This is insufficient. There is almost 2,000 hectares of public land and local authorities need to contact our member housing associations directly to develop all feasible sites.”

Social Democrats co-leader Catherine Murphy said the new target for the delivery of 20,000 social housing homes by 2021, while an improvement on previous targets, would not be enough “to resolve the housing and homelessness epidemic that we are facing”.

“There are currently 92,000 applicants on local authority housing lists – that’s about a quarter of a million people waiting for a permanent and secure home,” she said.

Independent TD Michael Fitzmaurice said a new “non-political agency to oversee the building of local authority houses nationwide” must be set up immediately. The Department of Housing and local authorities “are not able to deliver as things stand,” he said, pointing out “there has not been one local authority house built in counties Roscommon or Galway in the past four years”.