Building of €233m holiday village a vote of confidence in economy, says Taoiseach 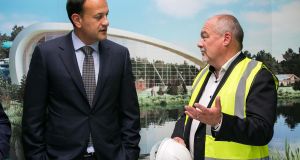 The planned opening of a €233 million holiday village in the midlands represents a vote of confidence in the Irish economy amid fears over Brexit, Taoiseach Leo Varadkar has said.

He was speaking on Friday after turning the sod on the commencement of construction work at Center Parcs Longford Forest in Ballymahon.

The UK leisure giant plans to create up to 1,000 full- and part-time jobs in addition to 750 jobs that are due to come on stream during its construction phase.

“We live in a time of extraordinary change and undoubtedly there are challenges ahead, not least from Brexit, so it is essential we continue to focus on competitiveness and value for money as well ensuring the free movement of people between North and South and between Britain and Ireland continues unabated,” he said.

Mr Varadkar said the venture had the ability to “unlock the potential of rural Ireland” and would be complemented by the Government’s €60 million Action Plan for Rural Development.

“This exciting development by Center Parcs represents a significant investment in the Irish economy, and especially in tourism,” he said.

“The €200 million investment is almost certainly the biggest in the region’s history.”

The Fine Gael leader was in jovial mood, citing how his own name was indelibly linked to acclaimed local poet John Keegan “Leo” Casey.

He said the resort would likely add upwards of €32 million each year to the Irish economy.

“We have always said this project would have a transformative effect on the midlands region and we have already seen signs of the positive economic impact Center Parcs is bringing to the area.”

He said contracts for the building of over 450 lodges and central buildings on the 395-acre site at Newcastle Wood were in train, with a formal announcement expected before the end of the year.