Risk to Galway prawns from microplastics rise on seabed - study 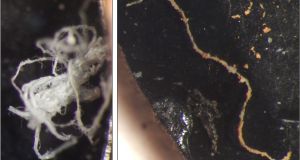 A increase in microplastic contamination along the seabed off the west of Ireland may have potential “detrimental repercussions” for the Gaway Bay prawn, researchers have found.

Researchers at NUI Galway have found an increase in microplastic contamination along the western Irish continental shelf.

Microplastics, plastics smaller than 0.5 mm, constitute part of the wider global plastic pollution problem. They enter the ocean and have a negative impact on marine life.

The researchers have found that microplastic pollution is increasing on the continental shelf, which is the seabed of the shallow area near the coast. The study found a shallow layer of microplastics forming on the Irish sea floor.

“An understanding of the distribution and accumulation of this form of pollution is crucial for gauging environmental risk,” said a statement from the researchers.

The microplastics recovered by the researchers appeared to be secondary microplastics, which are remnants of the breakdown of larger plastic items. These could be coming from polymer fishing gear or land based contributions from nearby factories, water treatment plants or households.

Primary microplastics are plastics that are originally manufactured to be small, like those used in facial cleansers and cosmetics.

The study found an increase in microplastics near fisheries in Galway Bay, meaning more microplastics are being dumped in this area over time.

“The pervasive presence of microplastics on the Irish Sea floor bares significant risks for economically important Irish fisheries, for example the Galway Bay Prawn,” said Dr Audrey Morley, senior author of the study and a lecturer in Physical Geography at NUI Galway.

She said a previous study on Scottish fisheries found prawns to be more likely to ingest “high concentrations of microplastic fibres when exposed to this type of pollution”.

She said the study shows the Galway Bay Prawn fishery to be experiencing the brunt of microplastic contamination, which would have “potential detrimental repercussions” for the prawns, including “reduced fitness and potential reproductive failure”.

“However, more research is needed to understand the mechanisms influencing interactions of microplastics with individual species and ecosystems,” she said.

This research was funded by a GSI Short Call from the Geological Survey of Ireland and a grant-in-aid for Ship-time on the RV Celtic Voyager from the Marine Institute of Ireland. To read the full paper in Scientific Reports, visit: http://rdcu.be/vECw

Separately a new US study has found that sea salt around the world has been contaminated by plastic pollution, adding to experts’ fears that microplastics are becoming ubiquitous in the environment and finding their way into the food chain via the salt in our diets.

New studies have shown that tiny particles have been found in sea salt in the UK, France and Spain, as well as China and now the US.

“Not only are plastics pervasive in our society in terms of daily use, but they are pervasive in the environment,” said Sherri Mason, a professor at the State University of New York at Fredonia, who led the latest research into plastic contamination in salt. Plastics are “ubiquitous, in the air, water, the seafood we eat , the beer we drink, the salt we use - plastics are just everywhere “.

Ms Mason collaborated with researchers at the University of Minnesota to examine microplastics in salt, beer and drinking water. Her research looked at 12 different kinds of salt (including 10 sea salts) bought from US grocery stores around the world.

Ms Mason found Americans could be ingesting upwards of 660 particles of plastic each year, if they follow health officials’ advice to eat 2.3 grammes of salt per day.