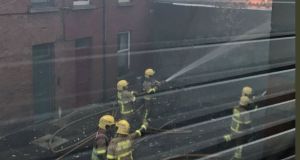 Dublin Fire Brigade dispatched several units to tackle a blaze at a disused factory in Harold’s Cross in Dublin on Friday night.

The fire at the premises in a built-up area on Leinster Place was reported at about 7.45pm.

No injuries were reported and the cause of the fire remains unclear.

Up to six Dublin Fire Brigade units were dispatched to bring the situation under control.

These included the hazardous material unit, following the discovery of an asbestos roof in the premises.

The fire has been brought under control. An investigation into its cause is ongoing.