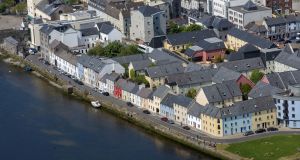 A European Capital of Culture expert says a new EU report on Galway’s 2020 project indicates it is “not being well-managed” at this stage.

British arts consultant Steve Green, who was chair of the panel which selected Galway as European Capital of Culture for 2020, says the report “raises very serious concerns” about progress.

The EU monitoring report warns that Galway is in “danger of losing track with the project and incurring further delays”, and identifies the need to appoint a new cultural leader.

In what Mr Green describes as an “exceptional” move, the EU panel is seeking a further update from Galway 2020 this November.

The Galway 2020 project lost its creative director when British consultant Chris Baldwin stepped down in May, just 10 months into his €110,000-a-year post.

The new report from the EU monitoring panel, which is a type of quality control for European capitals of culture, is based on a scheduled meeting in Rijeka, Croatia, in late June.

In its discussion with the panel, the Galway 2020 team highlighted the many EU partners involved in various projects, and said that a European dimension was “firmly embedded” in its cultural strategy framework.

The EU monitoring panel asked about an “apparent loss of enthusiasm on the communication of the initiative”, and about the relationship with the cultural sector community in view of media reports on “alleged lack of trust and confidence”.

The report says the Galway 2020 team “acknowledged there was some nervousness among the cultural producers, but this was normal with any project as it moves to contract stage”.

The EU panel’s report makes 15 recommendations, including defining and integrating a new cultural leadership plan “as soon as possible”, and clarifying the “roles, hierarchies and relationships” of the team.

It calls on Galway 2020 to “introduce measures to improve communication at all levels”.

The EU panel calls for a detailed breakdown of Galway 2020 programme projects, including partners, budget and calendar, and delivery of project contracts to allow for “implementation”.

It also urges Galway 2020 to continue work on the European dimension, and to keep “flexibility” in the programme to integrate “potential and actual European challenges” such as “Brexit and refugees”.

It stresses the need to invest further in relevant digital programming, which it says is “crucial to attract the younger audiences”.

Mr Green, who no longer holds a formal role, said his selection panel had been very impressed with Galway’s vision when it outbid Limerick and the “three sisters” of Waterford, Wexford and Kilkenny for the 2020 designation.

Galway’s budget is almost €46 million, but the 2020 project has recently indicated this might be cut to €39 million.

Mr Green said the “polite language” in the EU monitoring panel’s second report “raises very serious concerns on the progress of the project”.

He contrasted the Galway report with that on Rijeka, which also has a designation for 2020, and said the EU panel “appears to be far more impressed” with the Croatian city’s progress.

Mr Green said that most of Galway’s programme should be fixed by now, and there should be regular two-way communication – such as weekly meetings held with artists, as he had advised for Rijeka.

The project said its board welcomes the EU monitoring report and recommendations, “many of which are well under way”.

It said it would announce details for new cultural leadership “when a decision is made”.