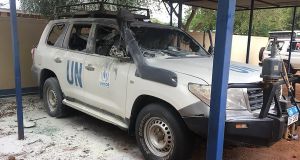 A west Cork missionary priest serving in South Sudan has said he will stay at his post despite an attack by 2,000-strong mob on his compound.

Up to 500 humanitarian workers have been evacuated from the Maban region of South Sudan as civil war rages in the country.

But Fr Tony O’Riordan, who is leading the Jesuit Refugee Service (JRS), has remained there to oversee a school building project and a teacher-training programme.

The attack has forced JRS to “suspend all but critical activities” to safeguard staff remaining in Maban.

Maban County is home to one of the world’s most isolated refugee camps – a sprawling tent city for over 150,000 refugees.

The camps contain refugees who have fled famine and persecution in the Blue Nile region.

In the latest outbreak of violence, Fr O’Riordan’s compound was attacked. It happened on July 23rd last, however telecommunication links out of the region are poor. Responding via a series of social media messages, Fr O’Riordan said on Tuesday, August 7th, that there were “50 of us left”.

“The situation is unpredictable.”

In an online posting on August 5th, he described how his personal walkie talkie radio buzzed through news of an impending attack on his compound.

“News was filtering through on the radio of serious damage being done to property, buildings and warehouses were being set on fire, cars were being trashed and property was being looted,” he said.

“The closest compound to us is only 300 metres away, soon we could hear that they were under attack.”

“We knew it was only a matter of time before a raiding party would arrive at our compound.”

“We had locked up what we could. Local staff had run to their homes.” He said those remaining in the compound took shelter in their four strongest rooms.

He said they “feared the worst”.

“We could hear the commotion of the 200 to 300 attackers who set out to cause mayhem.”

In total, eight NGO compounds were attacked. Fr O’Riordan radioed UN-Rwandan soldiers based in the country to extract them “but the event had caught everyone by surprise and the troops were overwhelmed”.

He described the moment the violent mob attempted to breach his compound’s perimeter fence, made of zinc metal sheeting:

Eventually, four members of the local parish council convinced the “mob” to desist and retreat.

“We were the only NGO compound to escape.”

Fr O’Riordan said protestors left a “trail of destruction” causing damage to the Jesuit “learning centre where we deliver teacher training, English language classes and computer training was not spared”.

“In fact, it is totally destroyed and everything was looted.”

Despite the violence, Fr O’Riordan said he remains committed to re-focusing his efforts on rebuilding what has been destroyed in the latest violence.

The attack leaves more than 80,000 people without access to English-language classes, computer courses and teacher training education and training which provide much-needed opportunities for a more stable future for them and their community, the JRS has said.