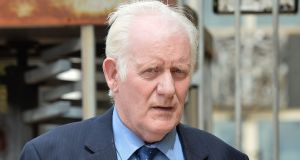 A former SDLP councillor convicted of sexually assaulting a teenager in her own home was sentenced to four months in jail on Tuesday.

At Antrim Magistrates Court, District Judge Nigel Broderick told an emotional looking 73-year-old Brian Duffin that despite his good character and references, “given the age and vulnerability of the injured party, I consider the custody threshold has been crossed”.

The judge imposed a four-month jail sentence. But following an application from defence counsel Chris Sherard, he freed Duffin on Stg£500 bail pending an appeal of both the sentence and conviction.

Duffin, a father of 11 and grandfather from the Cargin Road in Toomebridge, resigned his position with the SDLP on Antrim and Newtownabbey Borough Council after he was initially charged.

The court had heard how the pensioner “stuck his tongue” into the mouth of the 17-year-old girl, had one hand on her breast and the other on her inner thigh during the sexual assault.

An hour long video interview of the teenager was shown in court in which she recounted how Duffin sat down right beside her on the sofa, even though there were other places to sit.

“I thought I could trust him and talk to him,” she said. She told detectives when she began to get upset talking about her ill grandfather, Duffin put his arm around her and asked her for a kiss.

“He said ‘everything’s going to be ok’ and then he asked ‘give me a kiss’ so I went to give him a kiss on the cheek and he grabbed my head and put it towards his . . . he was coming forward and I couldn’t get my head back,” she said.

“He kept coming at me and I couldn’t get back and then he stuck his tongue down my throat — I just froze, I panicked,” she continued, demonstrating how Duffin had one hand in her breast and the other in her upper, inner thigh.

Estimating the attack last about ten seconds, she said when she managed to get up off the sofa, neither she nor Duffin said anything but he took his wallet out and took out Stg£40 which he put on the table and walked out.

Calling a friend and two relatives while she was “in hysterics,” she told the court when she told her mum what happened, “she just kept repeating ‘dirty dirty b******’”.

Duffin denied any wrong doing and said he only put his arm around the teenager to comfort her.

In court on Tuesday, numerous references were handed into court including from Duffin’s parish priest.

In addition to the jail sentence, the judge imposed a five-year Sexual Offences Prevention Order, the terms of which include having no contact with anyone under 17 without approval from a risk manager. Duffin must also sign the police sex offenders register for seven years.