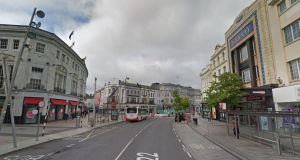 From August 9th, private cars will be banned from Patrick Street between 3pm and 6.30pm daily. Photograph: Google

Business leaders in Cork have expressed hope that an afternoon ban on private cars entering the city’s main thoroughfare, Patrick Street, will prove a success but have cautioned that it may take several months before it can be properly assessed.

From August 9th, private cars will be banned from Patrick Street between 3pm and 6.30pm daily. Cork Business Association Chief Executive Lawrence Owens said the move has been much better planned now than when it was first introduced in April.

Mr Owens said Cork City Council, through the CORE city centre partnership, had engaged with business owners as well as Bus Éireann and the Garda, to introduce the car ban and bus corridor move on Patrick Street as part of the Cork City Centre Movement Strategy.

“The move is far more measured, far more customer friendly than when it was trailed last April - there’s been far better communications about it with 150,000 leaflets sent out to homes in the Metropolitan Cork area, plus of course, it is different this time in a number of significant ways.”

Mr Owens said the decision to change the Park and Ride facility from the Black Ash on the South Link from stopping at Lapp’s Quay to instead stopping at Merchant’s Quay, Patrick’s Street, the Grand Parade and the South Mall was particularly welcome.

There will be an orbital bus service around Cork city centre, as the CBA had long advocated and the Park and Ride service will be free from 12pm Monday to Saturday. The introduction of half price parking at Cork City Council multi-storey car parks at Paul Street and North Main Street from 1pm to 6.30pm daily should also attract people into the city centre.

However Mr Owens cautioned that it may take several months for the new traffic management system to work.

“We haven’t set any review date with Cork City Council but it will take some months to see how it is bedding in. August is a quiet month so September will be the acid test with schools and colleges back but we’re hopeful it will work because everybody wants it to work for the good of the city.”

Cork City Council Chief Executive Ann Doherty said the move was key to addressing the serious traffic issues associated with the 10,000 new jobs due to come on stream in the city centre in the next five years.

“In recent months, Cork city centre’s CORE Group ... has worked very hard to develop a suite of communications, marketing and operational initiatives aimed at ensuring a smooth and effective reintroduction of the bus priority corridor on Patrick’s St,” she said.

In the first week of the car ban in April, a Bus Éireann survey found that travel times different routes through the city centre were reduced by up to 28 per cent.

1 Covid-19: ‘Green list’ may shorten as Cabinet looks to tighten travel restrictions
2 David Trimble: After the big dinner in Oslo, somebody said why don’t we party together?
3 Five Covid-19 clusters found among Irish fruit and vegetable growers
4 Maureen Dowd: The US president and the damage done
5 John Hume, architect of peace process, dies aged 83
Real news has value SUBSCRIBE