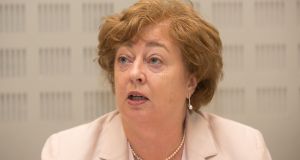 Social Democrats TD Catherine Murphy said affordability could not be achieved “until we get over the nub of the problems which is the cost of building land and the State has significant land banks”. Photograph: Gareth Chaney/Collins

The help-to-buy tax relief was introduced in 2016 and offers first-time buyers of newly built homes a maximum tax rebate of 5 per cent of the purchase price based on taxes paid over the previous four years.

Latest figures showed a total of 17,430 applications were made for the scheme, and by the end of June tax reliefs worth €104.3 million had been issued to 7,753 first-time buyers.

In a written parliamentary reply to Social Democrats TD Catherine Murphy, Minister for Finance Paschal Donohoe said 2,644 grants were issued for properties valued at between €226,000-€300,000.

This is the largest group of claims, accounting for 34.1 per cent of the total.

Ms Murphy expressed concern at the allocation for properties costing more than €450,000 and said “you have to ask is the State in some instances helping people who don’t need that assistance and could it be adding to inflation” in property prices.

The Kildare North TD questioned if it was the best use of public finances. She said 435 individuals bought a house costing more than €450,000 and were able to avail of this scheme and they’re first-time buyers.

“If the builder knows there’s a grant, do they factor it in to the cost?” She said that 3,914 people bought houses worth more than €300,000 and they had to have deposits as well.

Affordability could not be achieved “until we get over the nub of the problems which is the cost of building land and the State has significant land banks”.

Ms Murphy said a new agency had been established to deal with that and it would be a “very welcome initiative” if it managed the land bank by taking out the risks including the cost of finance for builders and the risks associated with delays in planning permission.

Proper land management could create a mixed tenure of rental local authority properties, homes for sale, large and small units for people upsizing or downsizing and developing a community.

“I think that’s a much more productive way to spend money in managing that land.”