Ross to clarify how much of promised €1.5m will go to hockey

Sport Ireland asked to ‘expedite its process’ to allocate the funding, says minister

Young hockey fans sang their hearts out before, during and after the Ladies World Cup Hockey Final which they watched on television at the Glenside Pub, Churchtown near the Loreto Hockey Club in Dublin. Video: Ronan McGreevy 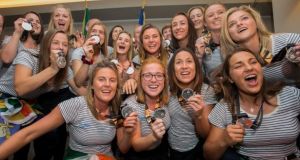 The Irish women’s hockey team had a meeting with Minister for Sport Shane Ross in which he promised them additional funding. Photograph: Gareth Chaney/Collins

Minster for Sport Shane Ross has said he will clarify what proportion of a €1.5 million cash boost to Irish sport will be made available to hockey in the build up to the next Olympics.

In the aftermath of the spectacular World Cup performance of the Irish women’s hockey team, Mr Ross announced the additional funding.

Speaking at a meeting on Monday with the hockey team at Dublin Airport, on their return from their silver-medal win in London , Ross declared that “hockey will enjoy a significant share of that” €1.5 million.

He said it would be released to athletes preparing for both the Tokyo games and the World Championship finals.

At Dublin Airport on Monday members of the hockey team cried when Mr Ross announced the additional funding for Irish teams.

In a statement released on Tuesday, Mr Ross said distribution of the €1.5 million fund would be made known “as soon as possible, possibly as early as next Monday, once the Board of Sport Ireland have considered and approved the allocations”.

He said Sport Ireland was aware certain sports including hockey were in need of additional funding.

“We are aware that there is an urgent need for additional funding for those preparations, particularly in sports where our medal hopes are high and the final preparations are crucial and costly,” the Minister said on Tuesday.

Sport Ireland has been asked to expedite its process to allocate the additional 2018 funding of €1.5m as soon as possible, he said.

1 Chairman of Fáilte Ireland resigns after it emerged he is holidaying in Italy
2 Gardaí investigate after woman pushed into Royal Canal following alleged racial abuse
3 A million trees, including 400,000 oaks, to be destroyed this week
4 ‘It was pitch black’ - Rescued teenager describes night afloat with her cousin in Galway Bay
5 Urgent report on Dublin eviction ordered by Deputy Garda Commissioner
Real news has value SUBSCRIBE