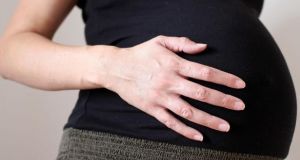 Stillbirths accounted for 250 of the total of 407 perinatal deaths in 2016, new report from the National Perinatal Epidemiology Centre has found. File photograph: PA Wire

A public information campaign may be required to alert women to the increased risk of perinatal death associated with obesity, a national body which prepares statistics on such deaths has said.

A new report from the National Perinatal Epidemiology Centre (NPEC) based at UCC finds that increased body mass index (BMI) is associated with perinatal mortality.

Over half (56.6 per cent) of the women who experienced perinatal loss in 2016 were either overweight or obese, the report said.

The centre said because Ireland had a particular issue with obesity, it would be useful to put in place a campaign to alert women about such risks.

However, the number of perinatal deaths in the State is at its lowest rate since records began. The perinatal mortality rate (PMR) was 5.8 deaths per 1,000 births or 1 in 172 births in 2016.

This represents a statistically significant (15 per cent) decrease in the perinatal mortality rate compared to 2015 and the lowest rate since recordings began. The most significant rate decrease was in early neonatal deaths.

Perinatal death refers to the death of babies in the weeks before or after birth and includes stillbirths (babies born with no signs of life after 24 weeks of pregnancy or weighing at least 500 grams) and neonatal deaths (deaths of live-born babies within 28 days following birth).

The report finds that low birthweight is associated with perinatal death.

Almost half (47.2 per cent) of all stillbirths and 25 per cent of early neonatal deaths were classified as severely small for gestational age. The authors said this highlighted the importance of close monitoring for foetal growth during pregnancy.

Perinatal mortality is described by the authors as an important indicator of quality of care in the Irish maternity services. The NPEC has worked with all 19 maternity units in the State to develop a national clinical audit of perinatal mortality.

Director of NPEC, Prof Richard Greene said: “It is wonderful to see the clear reduction in perinatal mortality described in this report. While this finding is just one for one year, we would hope that this trend continues in the future.”

“The most heartening aspect about this report is the amazing commitment of the busy Irish maternity units to go beyond clinical care and contribute to this national audit to help improve perinatal outcomes for mothers, babies and their families. The maternity services are leaders in the area of clinical review and audit.”

He said, however, it was important not to focus on rates and numbers alone as each perinatal death had a “profound” effect on the extended family.

Recommendations in the NPEC Perinatal Mortality Report in Ireland 2016 include the development of public health education programme on perinatal deaths and modifiable risk factors and improved antenatal detection of foetal growth restriction.