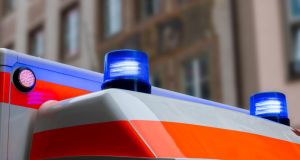 The emergency services were alerted and according to local media, paramedics worked to try and resuscitate the little girl at the scene before she was taken by ambulance to a local hospital. Photograph: iStock

A five-year-old Cork girl who drowned in Germany last week will be laid to rest on Monday.

Emmy Eckert was holidaying with her parents, Andreas and Darlene and younger siblings, Johannes, Paul and Josef, at Dessau near Berlin. On August 8th, Emmy went missing and was found in a lake.

The emergency services were alerted and according to local media, paramedics worked to try and resuscitate the little girl at the scene before she was taken by ambulance to a local hospital. She failed to regain consciousness.

Andreas, who is German, and Darlene, who is Filipino, live in Ballincollig in Co Cork where both work for VMWare. Both are members of the local Bible Baptist Activity Centre where Emmy’s funeral service will be held next Monday.

Pastor Craig Ledbetter of the Bible Baptist Activity Centre said everyone in their congregation was deeply shocked and saddened when they learned of Emmy’s death but people were rallying around to support the family.

“This is the worst nightmare that can befall any family but we just want them back home so we can just cry with them – it’s been hard on the phone but it will be good just to hug and hold them for a while and minister to their children because this has just to be unspeakable grief.”

A Go-Fund Me page has been set up by a friend and work colleague of the couple, Darren Lauser to assist the family and already €5,000 has been raised as people express their sympathies with the family. Emmy attended Scoil Mhuire in Ballincollig.

The drowning is the second such tragedy to befall a Cork family in the past week and follows the death of Avery James Greene (4). He died after being found unconscious in a swimming pool while holidaying with his family in Spain on Monday.

Avery had been staying at the Aldeas de Aguamarina Villas in Cabo Roig some 50km south of Alicante on the Costa Blanca when the incident happened at a municipal swimming pool on Monday morning.

The little boy was spotted floating in the pool at about 9am by a passerby who raised the alarm and he was pulled from the water. The emergency services were alerted with paramedics spending around two hours trying to revive him at the poolside.

According to local media reports, paramedics managed to obtain a faint pulse and Avery was taken by air ambulance helicopter the Intensive Care Unit of Alicante General Hospital where he was put on a ventilator but lost his battle for life on Tuesday morning.

Avery’s grieving parents, Eric and Amanda Greene and his older sisters, Robyn and Lucia are being comforted in Spain before bringing their child back to Mallow in North Cork for a funeral mass in the coming days.